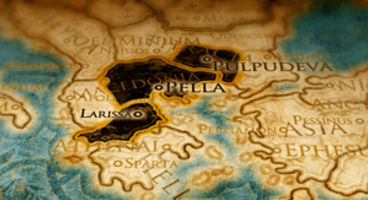 The latest faction to join the fray in Creative Assembly's Total War: Rome II is Macedon. Despite being locked into "pre-Alexandrian borders", the Macedon state is ready to give empire another crack.

The studio teasingly asks: "Can the Macedonian Empire rise again under a new Alexander?" This is the third faction revealed by Creative, joining Rome and Carthage. Who could be next?

The official wiki for Total War: Rome II has now been updated with Macedon, where the studio has given us some info as well as what bonus we can expect.

"Desperate to reclaim its past glory, Macedon finds itself locked into its pre-Alexandrian borders by the Illyrians, Thracians and Greek city states on all sides. Can the Macedonian Empire rise again under a new Alexander?"