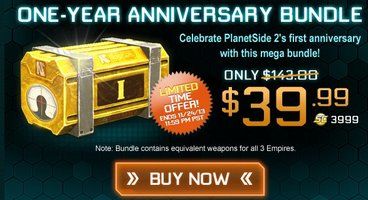 Sony Online Entertainment is celebrating the one year anniversary of the launch of their MMOFPS PlanetSide 2 with a special bundle as well as live events.

According to the publisher, "It's PlanetSide 2's birthday and every Auraxian needs a gift, right? From Tuesday, November 19th at 4:00 PM PST until Sunday, November 24th, 2013 at 11:59 PM PST, every Auraxian will have double experience and be able to purchase an exclusive One-Year Anniversary Bundle!"