21 November 2013 | By Jonah A. Falcon
As promised, Van Helsing I: Complete Pack is now available on Steam, along with a new demo. The Complete Pack, as the title implies, includes the original The Incredible Adventures of Van Helsing and all of the content released for it.

* Three playable classes – To embark on this gothic-noir adventure, players can choose from three very different classes: the classic Hunter with shooting and melee skills, the magic-wielding Thaumaturge, or the Arcane Mechanic, the master of deadly devices.

* Detailed level-up system – Players are able to spend points on hit points, mana, damage, and much more as they traverse through skill trees to mold Van Helsing to their liking.

* Hunter’s Lair – A central hub for players to stash collected loot, trade with non-playable characters, accept new quests from allies who join the resistance against the scientific scourge, teleport between locations, forge new items, and utilize the alchemy lab.

* Tower-defense mini-game – When the Hunter’s Lair is attacked by enemies, players have the opportunity to defend their HQ with deployable traps and several upgradable functions to ward off evil.

* Rage system – Enabling players to have up to three active skill modifiers called PowerUps, players have the ability to charge their PowerUps by way of spending Rage points collected from impressive feats.

* Unique companion system – Lady Katarina, a ghost with snappy wit, comes to the support of Van Helsing with her own set of abilities, behaviors, and two skill trees.

* Multiplayer – Allowing players to test their skills against each other via the PVP mode (16 players) or join their forces and complete the story in the co-operative campaign (4 players).

To sweeten the deal, the game, normally $19.99, will be half-off on Steam through to Friday, the 22nd November. 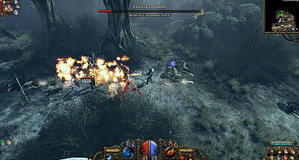