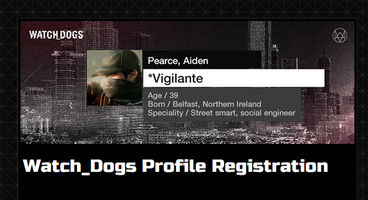 Got a Uplay and Facebook account? Well be careful because a certain hacker vigilante might be pinching your ATM pin this November, or eavesdropping that rather embarrassing call-back from the clinic.

There's a chance for 30 fans, who'll be selected at random, to have some of their details included in the upcoming open world of Watch Dogs. You need to provide three 'facts' about yourself.

Aside from your name, birthdate and occupation Ubisoft also want to hear about three professed 'facts' about yourself, which would appear as NPC profile data.

There are around 2.8 million living in the recreated Chicago city featured in Watch Dogs, so there's plenty of digital mischief to be had. Contest rules say you must be over 18 and hold valid Facebook and Uplay accounts. Only one entry per household is accepted and one per person - naturally.

The competition ends around June 7th where 30 entries will be picked. Enter here for a chance to be hacked!