Way of the Voice: Interesting NPCs Settle in Skyrim

25 April 2013 | By PRBot
You can hardly blame the people of Skyrim for being less than chatty. Tundra tends to bring out the directness in folk. It’s not surprising that neither man nor mer is making the effort for engaging conversation when facing the biting cold in nothing but a knotted beard and a fur loincloth. All those near a fire have no such excuse.

Skyrim might have cornered the market on icy mountain ranges and flying, fire-breathing lunchboxes, but the one thing it noticeably lacks is distinctive and memorable characters. The aggravatingly limited selection of dialogue that is inevitably repeated across the land all says the same thing: Skyrim needs more interesting NPCs. 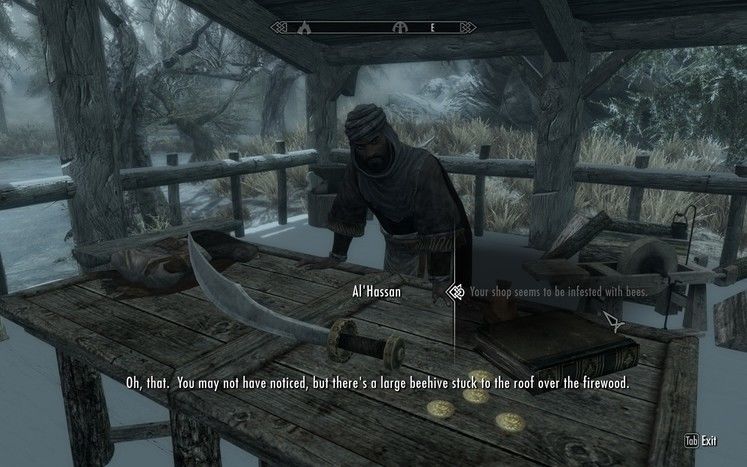 It’s fortunate then that new to Strategy Informer is the latest version of the Interesting NPCs mod; a truly titanic effort to populate the land of the Nords with colourful, complex characters, each with their own history, motivations and actual, distinct personality.

In practice that translates to over 125 new characters spread about the land, most of whom are voice acted. This army of fresh faces also comprises more than twenty new, unique followers with actual things to say, depending on where you are and what’s happening. Compare this to Dawnguard, which added 20-ish new characters of varying significance, and a single unique follower character (who complained about everything).

Interesting NPCs certainly has quantity, and more NPCs than all of Skyrim’s DLC combined, effectively doubling the amount of characters running around Skyrim’s base game. However, sheer volume alone doesn’t guarantee worthiness or even longevity, and Skyrim’s masses of samey content is the perfect example of this. The thing that’s special about Interesting NPCs is that it makes Skyrim feel so much more alive.

Skyrim’s weakest aspect is the dialogue. Accepting the generic, insubstantial and interchangeable things that most NPCs talk about, speech plays a lesser role in the game, and it’s rare for a character outside of the main cast to utter more than a few lines. When you’re in the wild it’s easy to be immersed in the lovingly hand crafted world, but that all stops once you reach a town. 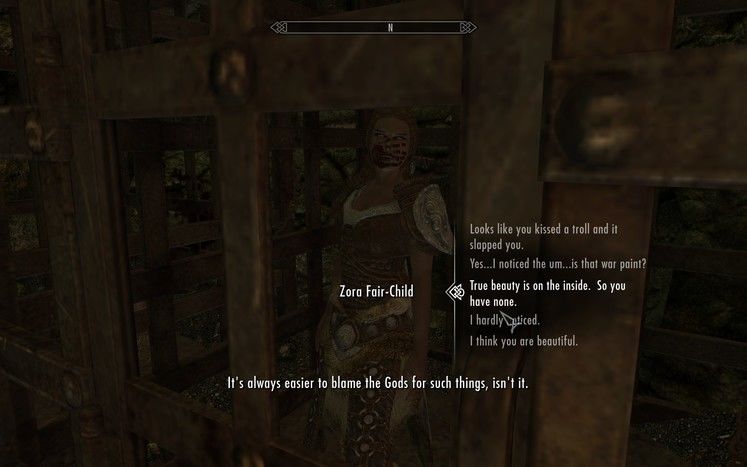 INPC bridges this gap. Now a tavern might host a burly Nord woman who brawls out of insecurity, or a disgraced knight in exile from Cyrodiil. A chance meeting on the roads might lead to discovering the prejudice interspecies couples face (is it considered bestiality to marry a Khajit?), or learning divinely inspired Akivari swordsmanship. Caves and dungeons host adventurers other than you, and a conversation can just be an interesting diversion, or it can lead to a series of events that grow into quests. Interesting NPCs makes Skyrim worth exploring again, because you never know who you might meet and what it might lead to.

In that spirit, INPC doesn’t spring quests on you; they develop out of making connections with characters and between other characters, and that slow burn of letting the details accumulate as the player pieces together how NPCs fit into the world, really works the free form aspect of an open world, and makes it all the more satisfying to finish a quest. There’s certainly more of the feeling of it being a journey, not least because of how events can actually affect and involve other characters, instead of the consequences of the player’s deeds being relegated to guard comments.

A good example is one clumsy woman making her way to Dawnstar, being the sibling of someone the player might murder as part of the Dark Brotherhood. It’s an event that nets an offhand remark in the base game, but is now a detailed talking point, filled with conflicted feelings, like someone who lost, but didn’t like their sibling might feel.

It’s refreshing for things the player can do to actually influence Skyrim in a meaningful way; even if it’s only meaningful to that one NPC, it’s a stride taken toward fleshing out the world. It’s very telling how much more believable Skyrim becomes when you can encounter characters who will actually talk about things, rather than just make mention of them at you. 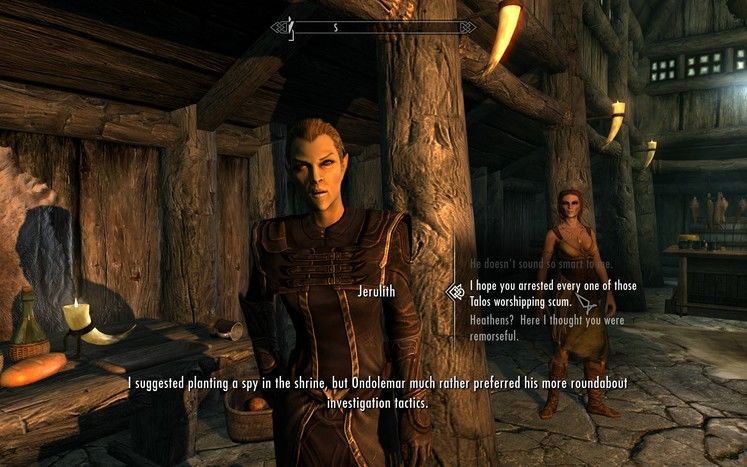 Some NPCs even have their own story arcs where they evolve as characters, or even meet a definitive fate, and it’s this kind of thing that elevates NPCs from mere props into important and memorable entities in their own right.

Factions too enjoy a more nuanced treatment with one of the major quest lines including espionage, a magical arms race, and a nihilist mage cult, which is a faction in and of itself, comprising of a host of characters the player may have already met. Dialogue isn’t just for flavour, but becomes a useful part of the experience, with branching dialogue that can determine alliances and the direction of quests. Most conversations have a few unique branches, and I’ve even found myself reloading on occasion to get some of the dialogue that can’t simply be revisited (unhealthy, I know).

Dialogue trees can get downright sprawling at times, which brings up the question of whether Skyrim is necessarily designed for that kind of detail. It reserves its in-depth conversations for a few key characters, and mostly errs toward the easily digestible for the sake of not stifling the hacking and slashing. The last time an Elder Scrolls title really dove head first into complex conversations was Morrowind, and INPC feels very much like it takes that desire that Morrowind had, to give players the masses of lore that makes up the world, but do so in a way that’s natural to the perspective of its characters, and is easy to navigate.

Being a collaborative volunteer effort, INPC does sometimes suffer from amateur voice acting and less than optimal recording conditions, but it’s true that it also has some very good voice actors with decent recording equipment. Despite the occasional player dialogue options coming across as unnecessarily mean spirited, the mod is immersive on the whole, and very immersive at its best. It’s also the biggest and most ambitious Skyrim add-on to date, weighing in at over 1 GB. 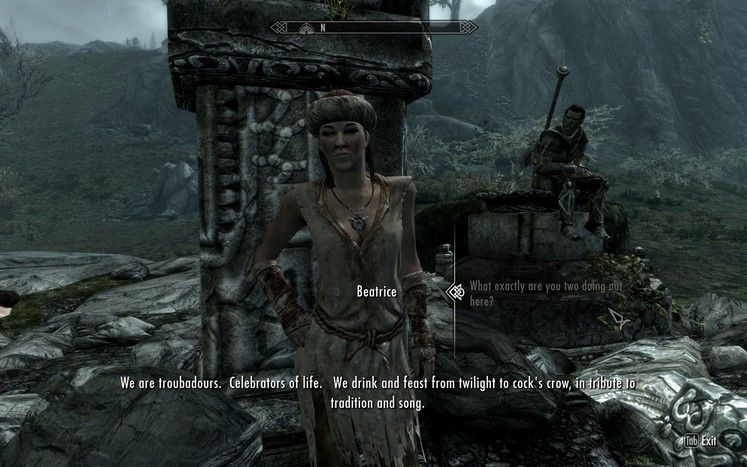 INPC is probably best experienced with a new player character as that would be the way to get the most out of its followers; their conversation topics for each of the important events creating the impression that the player character and follower have a shared bond through adventuring. With that said, I just dived right in after having completed the main game’s quests, and INPC was the shot in the arm the game needed.

Over a year in the making and the mod is still growing, still adding characters and quests. Bethesda might not be making content for Skyrim anymore, but Interesting NPCs is a perpetual expansion. Mods like Interesting NPCs and the dedication that gives rise to them are a reminder that the community surrounding it plays as vital role in The Elder Scrolls success as Bethesda themselves.

You can try Interesting NPCs for yourself here.