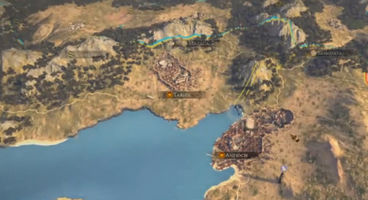 Creative Assembly had quite a blowout on Total War: Rome II campaign gameplay back at Rezzed. They showcased the huge campaign world of the sequel, and gave us a glimpse of civic management.

The footage is 25 minutes long and will have you drooling your finest cup of wine. They quickly explain some of the changes Total War veterans will be adapting to.

For instance, gone are the days of having to recruit units at cities and then march them off to join an army. Now you recruit from within the army itself, contextual to its region.

Army banners also gain experience, meaning that overall trait bonuses are earned and even upgraded to benefit all units. Even should an army fall then its banner can be resurrected back at a city to inspire a fresh generation. Those that lead armies also get earnable traits and even ancillary buffs.

Perhaps most exciting of all is how territories themselves have evolved, even by Total War: Shogun 2 standards. Each is reflective of their general environment and cities will actually expand outwards. Any upgrade we commission is also visibly reflected on the campaign map. Little shacks will form outside city walls showing the surge in population.

They also said that as cities grow we'll see more and more of their local environment exploited for resources, like woodland being cut down and farmland consuming more soil. Animals will also be present to easily show what type of units we could recruit like war elephants or camels.

Diplomacy also now shows our 'history' with what actions have pleased or angered them. There's a quite a few gems in the 25 minute long clip for those hungry for Rome to march again this October, courtesy of TotalWar-Turkiye.