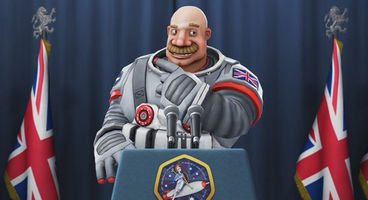 Adventure game Her Majesty's SPIFFING from BillyGoat Entertainment takes the Great British colonial enterprise to the stars, including her aptitude for daft tradition and quirkiness. Britain a 'rich mine' for comedy.

On the style of noodle scratching puzzles Her Majesty's SPIFFING will occupy a space between The Walking Dead and Deponia, where things "make logical sense" for absurd reasons.

The team didn't want to go with outright craziness in trying to figure out what solution fits a puzzle, but neither did they want the tedium of having to think realistically.

"Can I take this opportunity to say I love The Walking Dead, however, we do not intend to have the scenario where you use a broken spark plug to shatter a car window, I don't care if it legitimately works in real life!" director William Barr told us in our interview. The issue with that kind of puzzle is the 'click everything' madness that ensues.

"That particular puzzle descended into the just click everything territory, highlighting some of the genre's more frustrating moments. I know that the folks behind Deponia purposefully go out of their way to employ more far-fetched puzzles for comic effect, Her Majesty's SPIFFING will fall somewhere between the two."

"While on occasion you may be simply scavenging the environment to recover a 3.5" floppy disc to help reboot your ship's computer, on another occasion you may be required to duct-tape items to an amphibian from your ship's biological science micro-lab to use as a distraction in order to avoid a character hindering your progress."

"Regardless of the level of absurdity, we want to give the player puzzles that make logical sense in the game world, we don't want to make things too obscure that the player will have to watch a Let's Play to progress, but we want to make it challenging enough that they'll feel smart once they work it out." A patronising pat on the back? It's British alright.

"The core story of the game will be linear, however, all the conversations in the game will have multiple branches, so different players will be subjected to different trite jokes of ours, but they'll all suffer towards a common goal... I should clarify that's an attempt at my British, self-deprecating humour, I assure you the jokes will be super," added Barr.

"The mini-games we mentioned earlier will have a few different conclusions too that will often dictate small events in the story, but these won't affect the over-arching storyline."

Check out our full interview with William Barr on Her Majesty's SPIFFING which has 21 days on Kickstarter to go. BillyGoat are asking for £30,000 and soar far £4,300 has been pledged from just over 180 backers.