Smedley: "Busting our asses" to get cheaters out of PlanetSide 2 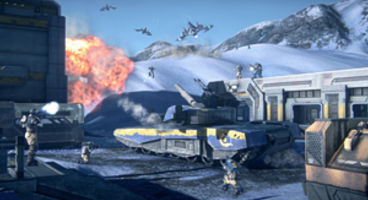 Sony Online Entertainment's John Smedley assures fans through Reddit that the PlanetSide 2 team hate cheaters "just as much as you do", and they're working tirelessly to find and boot them out.

They can't act hastily though and "falsely accuse" users who've just got good game. Smedley says they've got "very good hacking detection" but no system is perfect to catch all "aimbotting scumbags."

SOE won't just ban because player X accuses player Y, which is why it takes time to act. Frankly, Smedley is "blown away" by the 'sophistication' of major cheat sites.

“It’s a constant effort,” SOE boss John Smedley told Reddit, when asked about tackling cheaters. “We just want you to know we hate them just as much as you do and we’re busting our asses to get them out of the game. Do we do it as fast as you might like? Not all the time no. But we also don’t want to falsely accuse people without solid proof.”

“If we have clear evidence of a person cheating we ban them. We search for any other accounts they have and we ban those too. We have very good hacking detection algorithms. They aren’t perfect though. There are some things that are very hard to detect.” There are no week-long bans but temporary suspensions are used to investigate.

"Sometimes people say ‘But this guy is an obvious aimbotter’. That may be true. It may not be,” he continues. “There are a lot of really good people in this game. There are also aimbotting scumbags. Telling the difference can be tough for our players sometimes but it’s not for us. However we are careful about who we ban. We don’t just ban because some player reports and says person X is an aimbotter. We actually put in the time to confirm this.”

Sometimes it takes more than just targeting aimbotters; people are making money off it.

"After having personally viewed some of the major cheat sites I can tell you I’m blown away by how sophisticated some of these operations are. They are making money on this. We’re working on that from another angle too that I’m not going to go into just yet (hint. it involves lawyers). But we have the resources to fight this fight and we will keep doing it.”

PlanetSide 2 is one of the latest free-to-play MMOs in Sony Online Entertainment's arsenal. It can be downloaded and played right now through the official PlanetSide 2 website or through Steam.