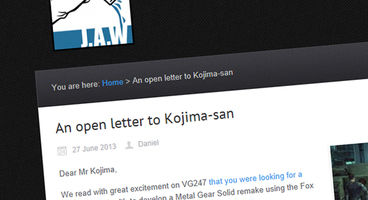 Oddworld: Stranger's Wrath developer Just Add Water has heard through the grapevine that Hideo Kojima would be open to the idea of someone remaking Metal Gear Solid in the new fancy Fox Engine.

The rumour started that it was being remade after a mistranslation in an interview, which Kojima-san apologised for. Just Add Water though "really, really want to do it" and appeal with an open letter.

JAW are also developing Oddworld: New ‘n’ Tasty, a remake of Abe’s Oddysee. They reckon they've got the dev chops and love for Snake necessary to pull it off.

"We are deeply sorry for the misinterpretation on our side," tweeted an apologetic Hideo Kojima, adding: "Well, if there's some creator or team in this world who has love and passion to remake "MGS1", I would love to ask for it."

You asked for it, and now Just Add Water are putting forward their pitch with the following open letter:

We read with great excitement on VG247 that you were looking for a studio to work with to develop a Metal Gear Solid remake using the Fox Engine, that your team has been hard at work creating.

We at Just Add Water feel ideally positioned to do the remake justice for several reasons:

1.We have experience working with legendary IP (Oddworld Inhabitants) and treating the subject matter with the respect it deserves.

2.Many members of our team are huge Metal Gear fans, with very good knowledge of the source material.

3.We really, really want to do it.

For evidence of our abilities, please check out not only the HD treatment of Oddworld: Stranger’s Wrath, released on PlayStation3, VITA and PC, but the current re-creation of Abe’s Oddysee, titled Oddworld: New ‘n’ Tasty.

We eagerly await your response.