27 September 2013 | By Simon Priest
In an official blog post, DICE has announced all the game modes available in Battlefield 4 with two of those featuring in the multiplayer beta. There are two newcomers to the Battlefield online formula.

Obliteration and Defuse are designed for 24-players and 5 vs. 5 respectively. Obliteration has been dubbed the "Battlefield Moments Generator" by the DICE team.

There'll certainly been some moments generated as it’s a "mad dash in vehicles and on foot" with explosives needing delivery. Basically you carry, place, arm and defend charges.

Not all will support Commander mode, which of course is entirely optional. The rather lengthy blog post is available here as DICE breakdown each of the game modes, but we've pinched the summaries of the two all-new modes for your reading pleasure below. Conquest, Rush, Squad Deathmatch, Team Deathmatch, Domination are all in. 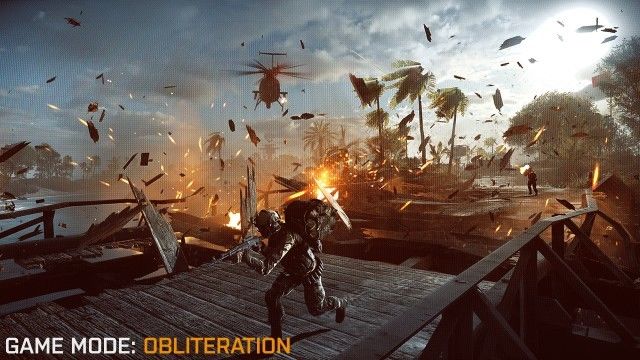 Combat type: Mad dash in vehicles and on foot to deliver explosives

We call this the ”Battlefield Moments Generator”. One of the two new game modes in Battlefield 4, Obliteration is definitely the most explosive! In Obliteration, a bomb spawns at a random location on the map. Both teams must fight to pick up the bomb, drop it off at one of their opponent’s three objectives, arm it, and destroy the objective. Once a bomb has detonated, the next one randomly spawns in a new location and the chaos starts all over. The game lasts until one team has detonated the other team’s three objectives. Obliteration can be devastatingly quick or a harrowing tug of war depending on how good your team is at staying together and delivering the bomb. Like most other game modes, there is usually also a time limit in place to make sure the match does not go on for too long.

Compared to Conquest, the action in Obliteration tends to be heavily focused on wherever the bomb is located. Since there’s only one bomb at a time, you will often find yourself going from attacker to defender in the blink of an eye. You need to be able to predict enemy movement to defend at the right place at the right time and reclaim the offensive – or intercept the enemy to reclaim possession of the bomb. The constantly shifting playing field from offense to defense is partly inspired by American football – with the detonation of an enemy installation being the Battlefield equivalent of scoring a touchdown.

Designed for: 5 vs. 5 players (all platforms)

The other new game mode making its debut in Battlefield 4, Defuse is a highly competitive and lethal. Each player is given a single life per round, every shot fired having the potential to drastically change the outcome. Teams can win by eliminating the enemy squad, or arming and detonating a military objective that they own (similar to the M-COM stations in Rush mode.)

Built from the ground up and designed to cater to the most competitive Battlefield players, Defuse provides a distinctly new flavor to Battlefield that stands in stark contrast to other modes like Rush and Conquest. Each player can only be revived once per round, and players who have been eliminated will be following the rest of the showdown from the sidelines.

Battlefield 4 releases on PC, Xbox 360 and PS3 October 29th. Conquest and Domination are in the beta.