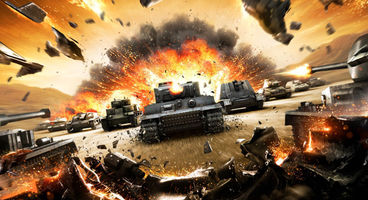 Wargaming has announced their MMO World of Tanks is officially a disciple at the upcoming World Cyber Games 2013 being held November 28th through to December 1st in Kunshan, China.

Its acceptance is "truly a testament" to World of Tanks success among eSports fans. The best tank warriors will be competing for prize pools across 16 national teams.

Only three teams can actually qualify for sacks of cash which tier at $35,000, $21,000 and $7,000. Wargaming promise all that "intense team-based action" will be livestreamed.

“Watching World of Tanks take the world of eSports by storm has been truly amazing," said Wargaming's Jonghyuk Baak. “Being selected as an official discipline of this year’s World Cyber Games is truly a testament not only to the popularity of World of Tanks around the world, but also to a clear sign of its continued success in competitive gaming.”

Wargaming recently launched World of Warplanes officially following an extensive beta test period, and they've also got World of Warships in the works. One day wars will be settled in eSports arenas - the writing's on the wall.