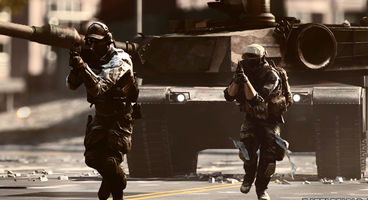 Pre-loading that Battlefield 4 multiplayer beta for PC? Better make sure it's done an a 64-bit OS. DICE general manager Karl Magnus Troedsson has just blogged the beta test is only supporting 64-bit.

Pre-loading on PC via EA Origin officially commences at 10:00am PDT, which is 5:00pm GMT/6.00pm BST. It's available to Battlefield 3 Premium owners early.

"Note that you are required to run a 64-bit OS to join the Battlefield 4 Beta on PC. As a studio, we wanted to focus our efforts on testing the 64-bit version of the game. The full version of the game will also run on 32-bit Windows OS," blogged Troedsson. This is sure to disappoint some PC gamers working those old 32-bit warhorses.

As for cheaters: "We are happy to let you know that we have increased our protection against cheaters to not only use PunkBuster, but we will also work side by side with Gameblocks, who will provide us with their anti-cheat engine FairFight. We believe that the FairFight engine will be a great complement to the anti-cheat measures already in play."

"During the Beta we will try out both FairFight and PunkBuster to make the experience as good as possible for our players. You will notice information about the two anti-cheat measures on the server browser pages on Battlelog, and you will also potentially see messaging in the chat box in-game when a cheater is caught."