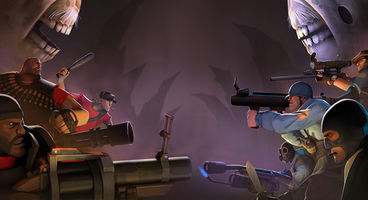 To celebrate Halloween this year Valve have once again broke out the rubber spiders and pumpkins for Team Fortress 2 as they run a special spooky event from now until November 11th.

Scream Fortress is joined by a new comic with over 100 new items from the "twisted imaginations" of the community, action slot spell books, and new Payload Race map Helltower.

A full rundown of Scream Fortress has been blogged. It's there you'll learn the terrible terrors Valve have cooked up for Team Fortress 2 fans. Eight achievements up for grabs.

"Written by sad, stay-at-home wizards with big dreams and rudimentary Photoshop skills, these poorly-assembled tomes contain magic spells of unspeakable lethality, nestled in between long passages of copyrighted characters having sex with each other!" Spell books are given freely to players who can stock them up with spells.