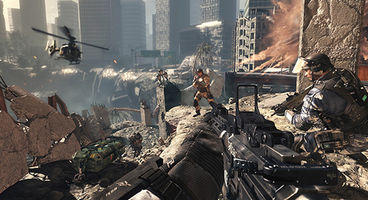 War! The lines have been drawn with Call of Duty: Ghosts. Forget space station weaponry and dogs trained in downing helicopters, the real battle is the conflict between camp Xbox and PlayStation.

Platform comparisons are inevitable and now Xbox One and PS4 are set to square off and already there's trouble as Call of Duty: Ghosts on Xbox One can't match PS4's 1080p.

Call of Duty has always aimed for 60 frames per second and that's the reason behind this. A similar situation has arisen for Battlefield 4 with PlayStation 4 using a superior native resolution than Xbox One.

Obviously the thing to take from this... Infinity Ward and DICE are total PlayStation fanboys who actively seek to destroy the happiness and wellbeing of Xbox gamers by hitting them where it hurts: rendering resolution. Case closed.

Meanwhile, not to rub salt in wounds or anything, but PC gets hardware-accelerated NVIDIA PhysX and TXAA.