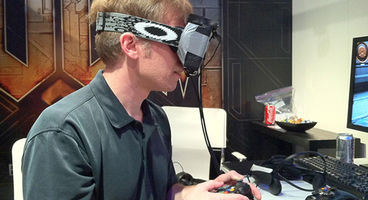 John Carmack is accused by Bethesda parent company ZeniMax of taking software that he developed whilst at id Software with him to his new employer, Oculus VR. ZeniMax are demanding a license agreement.

Oculus VR intend to "vigorously defend Oculus and its investors", adding that such claims are "ridiculous and absurd". ZeniMax made these claims back in 2012.

Whilst working at id, Carmack was sent prototypes of Oculus Rift and helped develop some of the software and created a modified version of the headset.

ZeniMax assert this modified design by John Carmack formed the "template for Oculus’s Rift headset" during E3 2012. They've been pursuing compensation since that summer, and are now trying to coerce Oculus VR into signing a licensing agreement, which would imply they agree ZeniMax is the rightful owner of the VR technology.

"It was only through the concerted efforts of Mr. Carmack, using technology developed over many years at, and owned by, ZeniMax, that Mr. Luckey was able to transform his garage-based pipe dream into a working reality," ZeniMax told Oculus VR and Facebook’s general counsel, Colin Stretch, as of April 18th.

An Oculus spokesperson told the Wall Street Journal that this is "unfortunate, but when there’s this type of transaction, people come out of the woodwork with ridiculous and absurd claims.”

"We intend to vigorously defend Oculus and its investors to the fullest extent,” they added.

John Carmack became Oculus VR CTO in August 2013 before leaving developer id Software. He left the studio he co-founded after being turned down by ZeniMax to invest in virtual reality software and games. Oculus Rift was bought by Facebook in a deal worth $2 billion, which deeply divided original backers of the project.