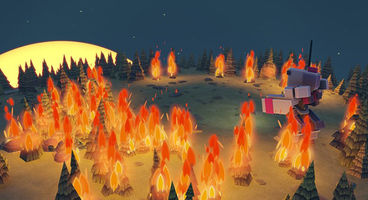 Raging forest fires are set to become a thing in Planetary Annihilation as Uber Entertainment will give those lush green trees actual physical form, meaning our armies can't just march through them.

We'll have to start deciding what to do with forests. Use them for bursts of resources, keep them as a natural barrier to the enemy, or burn them down for more room?

Uber is also introducing a new Public Test Environment option, where the team apply their crazy ideas before deciding whether they're stable enough for a full update.

Until now those tests have remained internal but the studio wants to open them up to the public to help gather feedback and a sense how they'll be received. "Until now, this was a part of the Planetary Annihilation journey you didn’t get to see. The Public Test Environment is a public-facing version of the game where we’re trying out a lot of cool or interesting ideas, much like we did in our private in-office tests," explained Uber in their latest Kickstarter update.

Planetary Annihilation will also be featuring secondary unit colours again, eventually. "We pulled them in the initial Gamma update because some combinations just didn’t read well. People couldn’t tell what army was what color." Their new implementation is a lot more subtle and so it should be very easy to see who they belong to.