07 October 2014 | By Admin
A group of former BioShock developers have come together to start a Kickstarter campaign for surreal first-person adventure game The Black Glove.

It's set in a bizarre 1920s theatre called the Equinox, which is slowly coming unstuck from conventional reality. Your job is to inspire the artist Marisol, the filmmaker Avery Arnault, and musical act Many Embers to put on one hell of a metaphysical show.

All while trying to stop them from falling through time or being absorbed into an alternative dimension. To change the creators' past and improve their work in the present, you'll need to enter the fourth dimension through (stick with me here) an 80s arcade fruit machine.

Enter the machine, complete set challenges and defeat 'the Space Minotaur', a kind of recurring nemesis trying to destroy the Equinox, and you'll unlock the ability to inspire your team of artists in one of several ways using your reality-altering black glove. Still with me?

"Accomplishing game "feats" summons The Black Glove," explains developer Day For Night Games, "which allows you to alter aspects of the creators' past ’” specifically, their Medium, Message, and Muse. Alter one and everything changes. A somber, portrait art display becomes a kaiju autopsy scene where giant monster parts glow like scorpions under black light. A warbling country act in The Music Club is replaced by lounge singers in smoking jackets. A poorly-conceived 70s disaster film in The Cinema turns into a silent movie sci-fi gem, once thought lost in a fire."

Right, I've done my best to explain this David Lynch-inspired surrealist vision. To learn more, check out the handy video above or head over to the game's Kickstarter page. The team are hoping to raise $550,000 by November 7. 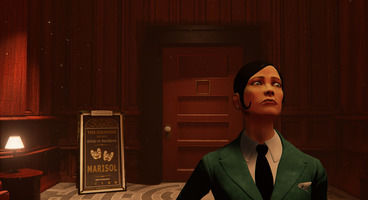 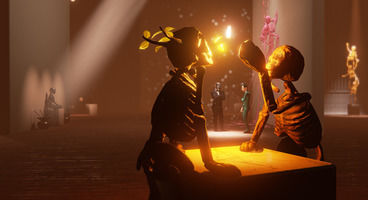