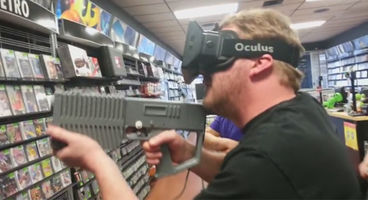 Oculus Rift lets us 'look around' virtual worlds but when it comes to controls things aren't quite mapped out yet. Alpha Gun is looking to provide a peripheral with "independent tracking" for first-person shooters.

Look left but point the gun right and Alpha Gun will let you blind fire, for example. A small video has released showing a 3D printed pre-alpha scripted prototype in action.

The goal is to have this peripheral gun ready by the time Oculus Rift is in the shops for the everyday consumer. Creator Chris Gallizzi has been testing it in public.

First-person shooters would obviously be quite a draw for Oculus but the gun remains static, and that could be a problem. So Gallizzi decided to develop a mod called Alpha Gun and has been in contact with Oculus co-creator Palmer Lucky, and he's been using Bluetooth and even a rumble motors for physical feedback in the device.

Below is footage of a public test of Alpha Gun in a Play N' Trade store.