SpellForce 2: Demons of the Past

SpellForce 2: Demons Of The Past out now, trailer released

16 January 2014 | By Nick Horth
Fantasy RPG/RTS hybrid Spellforce 2: Demons of the Past was released today on Steam and in boxed physical retail form. The stand-alone expansion to 2012's Spellforce 2 brings the series storyline to a close.

There's also a new launch trailer, which shows off the game's art style and various factions. It doesn't contain any gameplay, oddly enough.

Here's how developers Nordic Games described the title in their launch press release.

The final instalment in SpellForce 2 brings the story to an epic end where players will battle it out to save the land of Eo. Demons Of The Past is a stand-alone adventure with a play time of more than 25 hours, and uniquely blends RPG and RTS, offering five new worlds (8 in total) for players to explore. Players can enjoy the game in either single player or multiplayer mode which includes Campaign, Free game (co-op), Skirmish and Domination plus the new Survival mode. In Survival mode, enemies will attack the player(s) wave after wave up to the big guy.

Related Games:
SpellForce 2: Demons of the Past

SpellForce 2: Demons of the Past Essentials 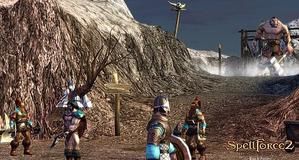