20 November 2014 | By SimonPriest
A free update to RedLynx's platform racer Trials Fusion will be launching in 2015 and with it come Teams and Online Multiplayer. Three modes will be offered to multiplayer gamers, with two private.

Teams, which are basically guilds, can have up to 50 members sporting a name and emblem. Teams get their own bulletin board and can race privately with the new Online Multiplayer.

Of course the Teams will compete in a big leaderboard to battle for supremacy. PC gamers get to beta test the multiplayer from today, announce Ubisoft, which supports up to eight players. 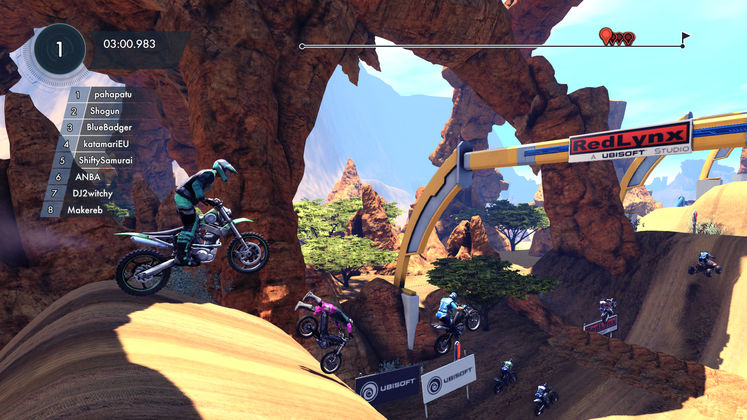 · Online X-Supercross- up to eight players race on three random tracks, after which a winner is announced based on an accumulative best score.

· Private Game- up to eight players select which tracks to race and customise race parameters such as gravity of the track, modifying bike speed, or inverting the bike’s controls.

· Private Game with Spectator- Players looking to watch online multiplayer select the tracks and parameters for the race and invite eight other players to ride so they can kick-back and watch the race. These matches can also be broadcast using streaming platforms.

Online X-Supercross will be what's used to increase rankings on the leaderboard. Check out the Trials Fusion website for more on the multiplayer and its beta test on PC.