21 February 2014 | By Simon Priest
Once a Ouya exclusive, TowerFall Ascension is side scrolling over to PC and PlayStation 4 next month bringing its competitive multiplayer platforming action to PlayStation Network and Steam March 11th.

This Ascension version will come packed with 50 new levels to battle it out on, and Ouya will receive these too "as a free update" 3 months later. There's also a co-op quest mode.

It's an archey combat arena game with four game modes. A limited supply of arrows means some tense combat, but you can pick up your opponents arrows as well as your own.

If playing it solo then your goal is to hit targets dotted around the arenas before time expires. TowerFall received glowing reviews from critics when it launched exclusively for Ouya, and now its bound for PC and PS4. 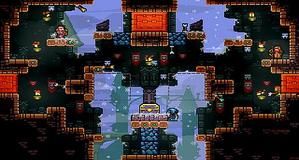