23 April 2014 | By Nick Horth
Indie developer Albert Olivera has started up a Kickstarter campaign for his "single-player, spaceship-building, crew-management, space-exploration game" Universe Edge. Running until May 22, Olivera is looking for $26,400 to fund the production.

There's an element of Minecraft about the project, with the same blocky graphics and focus on building. The plan is for players to be able to explore the galaxy, mining resources to craft new and better ships for their fleet while making sure their crew has all the food and necessities they need to survive.

The ambitious developer is doing all the work on Universe Edge himself, and explains his "dream game" on the Kickstarter campaign page as follows. "In Universe Edge, You will be able to build a spaceship, spacestation, build a base on planets or asteroids. Build and interconnect equipments that has their own functionality that will contribute on your ship's overall performance. Manage your crew, and guide them to survive."

"The games that inspired me to start the development of Universe Edge were Gnomoria, Eve Online, The Sims, and FTL."

There's the usual list of stretch goals and rewards, as well as more detailed information about planned game features, over at the campaign page. 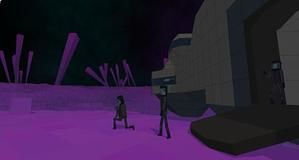