Alienware's Steam Machines do allow customisation, 'little freedom to do so' 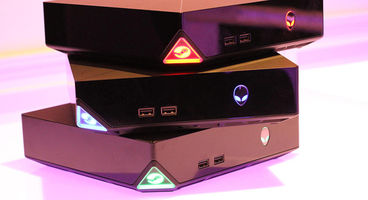 Alienware has clarified what they meant by "no customization options" for their upcoming 'annual' Steam Machines, as apparently 'no customisation' means 'some, but not a lot' in their corporate vocabulary.

Their Steam Machines are much smaller than your usual mini-PC, like Alienware's own X51, so upgrading internal parts "will not be as easy" - but not impossible.

Initially the PC manufacturer clearly made it sound as if they were selling mini-PCs as their own line of console, which flies in the face of advantages a PC gives you.

"Enabling customers the opportunity to upgrade components has been a core tenet for Alienware since the company was founded, and that remains true today," Alienware boss Frank Azor told Eurogamer.

"The Alienware Steam Machine, announced at CES, is designed to deliver a great gaming experience in the living room and we will enable customers to upgrade components. Considering we've purposefully designed the Alienware Steam Machine to be smaller than the latest generation consoles, upgrading the internal components will not be as easy as compared to other platforms, such as the Alienware X51, but we will not prevent a customer from upgrading."

He still advises those who are interested in customising or modding their PCs to stick with models better suited to that role. "If a customer is interested in modding and upgrading their rig on a regular basis, then we recommend the Alienware X51," he said. "Enabling easy upgradeability was a critical design requirement for the X51. It includes features such as single screw access to all internal components, and easy-to-remove ODD, HDD, graphics, etc."

"We feel we have multiple options for customers based on their individual needs. If a gamer wants more freedom to upgrade, we have the X51. If they would prefer a smaller, more console-like system, we will offer the Alienware Steam Machine." Valve, why not producing their own line of Steam Machines, has sold the premise of these mini-PCs with SteamOS as entirely open platform for tinkering, hence why Alienware's 'no customisation' caused alarmed.

A tidal wave of Steam Machines from PC manufacturers is expected to debut this year, but any mini-PC will do as SteamOS is provided entirely free by Valve. You don't even need a powerful mini-rig if you're set up to handle Steam's In-Home Streaming, which uses your PC to stream the games to a less powerful device on your network.