24 November 2014 | By Nick Horth
Prepare for your wallet to take another battering just a few weeks before Christmas, because Steam is kicking off its Autumn sale this November 26.

The news was revealed by an email sent to Paypal customers, which revealed that the sale would run until December 1. Valve hasn't officially confirmed anything yet, but it's pretty much a given that the dates are correct. 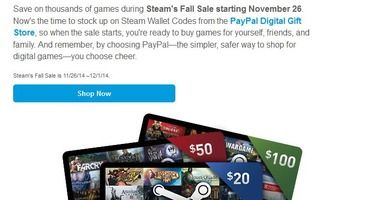 As usual you should expect an avalanche of daily and weekly deals, with various special offers and probably some kind of dumb voucher system to further confuse you. Given the frankly ridiculous number of high-quality games that have just dropped, I'm sure everyone's feeling a bit more frugal than usual at the moment.

But yeah, like that'll stop you buying Battle Chimps 3: The Quickening the second you see it for 15% off.