26 June 2014 | By Nick Horth
Deep Silver has revealed a new trailer for Sacred 3 that focuses on the competitive side of the game, namely the question "Who's got the biggest trophy?"

No gameplay, but good for a sense of the light-hearted tone the game is going for.

Sacred 3 features "classic arcade Hack ‘n’ Slash action centered around drop in, drop out cooperative multiplayer", and sees the return of series characters Seraphim, Ancarian, Khukuhru and the Safiri, as well as new guy Malakhim. Each has their own fighting style and specialties, and players will compete to top local and online leaderboards.

Since it's always better to get a look at gameplay than watch a CGI trailer, here's an in-game video released earlier this year.

Sacred 3 is coming to PC and last-gen consoles on August 5. Check out the official website for more on the game. 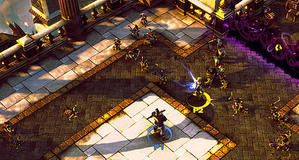