The mighty Mako will return in the next Mass Effect game

28 July 2014 | By Nick Horth
Good news for fans of dodgy yet somehow loveable vehicles - according to Bioware the mighty Mako will make a return in the next Mass Effect game.

that due to a new focus on exploration, players will be able to customise the all-terrain vehicle to their own liking, and Bioware are apparently making sure that handling "is as responsive as possible". How boring of them.

The Mako was, of course, the transport that players used to travel around hostile planets in the original Mass Effect. The sequel ditched it for a thrill-a-minute resource probe minigame, which gives you some idea how successfully it was integrated.

"We're playing around with a bunch of different physics for the Mako. The thing that we have to do is make sure it is as responsive as possible,"

said the game's producer Mike Gamble. "We've learned a thing or two over the years."

In other news, Bioware have revealed that although this is a new story completely separate from Shepard's adventures, it will involve the secretive N7 organisation of which he or she was a member. Journalist Phil Hornshaw, present at Bioware's Comic Con panel, tweeted the following: "Still years away and might change, Bioware says. But "our hero has something to with N7."

More information on the next Mass Effect title as it emerges. All hail the humble Mako. 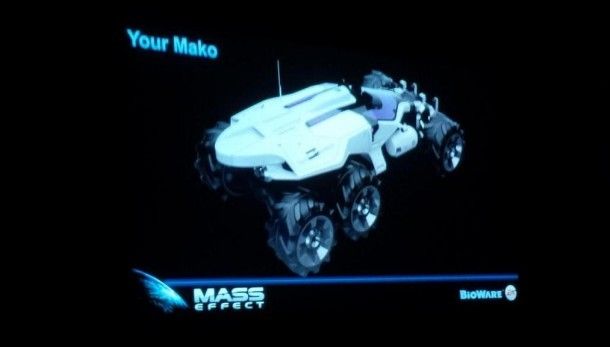