World of Warcraft's Tauren have been udderly reworked

29 July 2014 | By Nick Horth
The latest Blizzard 'Artcraft' blog post, in which the design team explain the ideas behind the various updated character models on the way in World of Warcraft: Warlords of Draenor, takes a look at everyone's favourite mutant cow-people - the Tauren.

In short the team are aiming to add a lot more detail while also sorting out those massive bloody arms and "completely out of control" hands. Not my words, the words of the actual developers.

"The original female Tauren had a lot of issues with too-angular geometry and stretched-out textures," writes senior art director Chris Robinson. "It’s not her fault’”it’s just what we had available to us at the time. Our new process has allowed us to add a lot of detail to her hair, fur, horns, and hooves, to build a far more detailed and expressive face, and to add a lot of definition to her musculature (while retaining her shape and silhouette)."

The result is a model that looks like a Disney cow serial-killer. I'm a bit underwhelmed by this one, really. I liked the more bestial, aggressive-looking Tauren a lot more than this more sinister, placid look. Those dead eyes. Brrr. Still, at least the weird hands have been sorted out a bit.

"Warcraft character design is commonly known for its stylized long arms, large hands, and big feet," continues Robinson, "but the female Tauren’s hands were just completely out of control. We brought them down to a more consistent size with the other updated models, and were also able to add a ton more detail and dexterity in the process."

World of Warcraft: Warlords of Draenor is expected out late this year, though there's no official release date as yet. 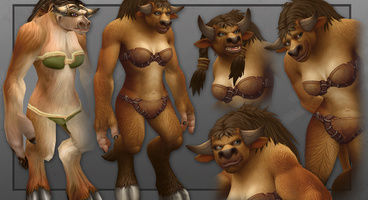 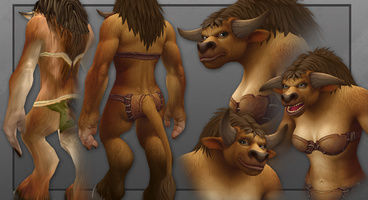