29 August 2014 | By Nick Horth
The latest addition to the League of Legends roster is Azir, the Emperor of the sands. He's a wizardy type who likes to summon soldiers to take care of battles for him. I think that would be my ideal approach to warfare too.

According to a profile page over on the LoL website Azir relies on his minions for raw damage, while using spells to "manipulate his and his soldiers’ positions to keep him safe and establish dangerous no-go zones for his enemies" 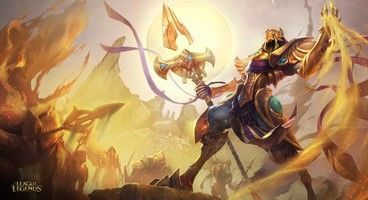 So obviously directly controlling a horde of soldiers around the battlefield would be something of a hassle. To solve this problem, Riot has made it so that his summons require "an active input. Azir must right-click and go through a basic attack animation for soldiers to do anything. This makes both Azir and his enemy understand that a conscious command was given to the soldier. This also means that if Azir is stunned or running away, soldiers cease to be a threat. All of a sudden, Azir’s opponent can comfortably aggress."

Essentially, rather than dragging his minions alongside him, Azir uses them as extensions of his own attacks. Though obviously he has a couple of special moves to make things a bit more interesting. From the look of it he'll be a little tricky to use if you're new to the game.

There's no release date set for Azir just yet.