30 November 2014 | By SimonPriest
The third-person shooter Plants vs. Zombies: Garden Warfare from PopCap Games could be planting sequel seeds as Gary Clay of the studio has asked for the "number 1 feature to add".

Also what characters would the community like to see return, or introduced? It's unclear whether this is idle curiosity from the team, or perhaps something more to drum up support internally.

Clay is the brand strategy lead for all IP over at PopCap, so we can at least confirm they're thinking about maybe, sorta doing a sequel... possibly.

If PopCap ever made another Garden Warfare what would be your number 1 feature to add? What characters would you want to see?

Garden Warfare is the first ever third-person entry into the Plants vs. Zombies series, which until then had always been a strictly 'casual' tower-defence style game. It's blooming popularity though led to the surprisingly entertaining shooter, which was built using DICE's Frostbite 3 engine. 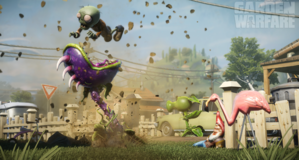