05 January 2015 | By SimonPriest
Space is the final frontier, and it's finally 'back in fashion' for the PC community. Two former bigwigs from EA DICE have formed their own studio Fugitive Games, and their first project is a single-player space sim.

A Kickstarter has just launched for Into the Stars, where we'll captain a vessel looking for mankind's new home. We command an inexperienced crew through a "solar system packed with mystery and danger."

We get to outfit our ship, hire a crew and then blast off into uncertainty. There'll be resource scavenging, civilian rescues and of course some less than friendly encounters with aliens. It's even sporting music from Jack Wall, the man who put together than quite splendid retro sci-fi soundtrack to BioWare's original Mass Effect. 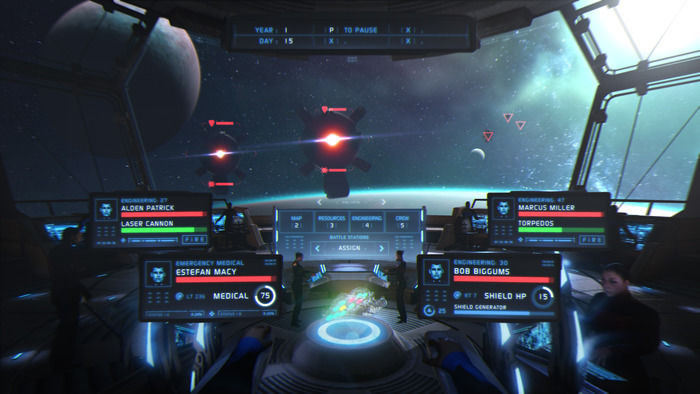 Fugitive Games is made up of just four developers and they'll be using the Kickstarter funds to extend their time with the game, like cramming in a lot of polish before it reaches backers and the rest.

Ark 13 is the name of our ship, which sets off from our 'besieged planet'. Our crew will suffer permadeath, making decisions for landing parties or mining resources a heavy choice. We'll be pursued by a relentless alien force looking to finish our species off, so lingering too long in a system could spell the end.

Check out the Into the Stars Kickstarter, which has just begun. Fugitive Games are asking for $85,000 to achieve success, with an Early Bird special available to the first 1,000 netting you the game for PC / Mac for just $15. It's powered by Unreal Engine 4 and will release on Steam. I'm now out of $15.

Complete Control: Take command of an inexperienced crew and guide them through a solar system packed with mystery and danger. From your seat on the bridge you'll steer the ship, manage resources and control your ship's systems while engaging friendly and hostile aliens. Can you make the right choices and reach the planet we'll call home?

Explore a Massive Solar System: You have the freedom to set your course for salvation, but no approach is free of peril. Each of the 90 zones in this sector present unique opportunities along with challenges, and only you can find the path to success.

Challenging volley-based Combat: Sometimes trade discussions break down and often the other party is out for nothing but blood. That's why your ship is equipped with a number of weapon systems that can speak for the human race in a language everyone can understand. Choose your target points and battle stations wisely to survive numerous alien encounters.

Music by Jack Wall: Driven by an original score from the legendary composer behind the music for Mass Effect, Call of Duty and Lost Planet.