10 August 2015 | By Nick Horth
GRIN, the studio behind crowd-funded action-platformer Woolfe - The Red Hood Diaries, has closed. Founder Wim Wouters broke the news in a heartfelt blog post that basically makes you feel incredibly anxious for all the other indie developers out there.

"The team is now dismantled and we have requested bankruptcy unable to pay outstanding bills," Wouters writes. "I guess our public silence the last few months already said a lot. It is not out of disrespect that our communication dropped to almost zero… it is out of shame. It is truly devastating to read the negative comments we received by some press and players. With Woolfe being the most passion driven thing we have ever created, it feels horrible to live with the feeling we let you down."

He also admits that the team made some mistakes, and underestimated the impact of some of their decisions; moving from a planned 2D style to 3D "had a major impact on overall development cost", and lead to problems with combat, exploration and collision detection that the team never really conquered.

Wouters reveals that most of the Kickstarter backer rewards that were promised during the game's successful campaign are ready and printed, but there's no money left to post them.Volume 2 of the game's two-part story will likewise never see the light of day.

He signs off by revealing that the team has put up the game's assets and IP for sale, in the hope that a new development studio can take the idea and run with it. I'd recommend reading through the full blog post, which details just some of the difficulties that developers, and indeed crowd-funded productions, face.

It's all a massive shame, because Woolfe was a lovely looking game that clearly had a lot of love poured into it. The art design and gameplay elements simply never mixed coherently together, and GRIN never quite managed to bring the game they set out to create to life. This is, unfortunately, always going to be the risk that crowd-funded developers and customers take. 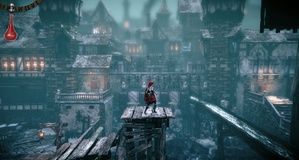