14 July 2015 | By Nick Horth
Call of Duty: Black Ops 3 is getting a 40's themed Zombies mode, complete with lashings of Jeff Goldblum (great casting there), but it's also getting a bonus level based on a classic map from the series.

The Giant features a separate cast of heroes from the rest of the shooter's zombie-slaying levels, and is based on Der Riese, which was set in an abandoned Nazi weapons factory, and featured hellhounds, teleporters, and all sorts of other nonsense.

The remake still features the original cast; Tank Dempsey, Nikolai Belinski, Takeo Masaki and Edward Richtofen, and is largely the same as the original in terms of setting and in-game objects. The Pack-A-Punch perk machine also returns.

You can find out more about Shadows of Evil the core Zombies mode in Black Ops 3 here. The Giant will be available in the game's Hardened, Juggernog and Digital Deluxe editions when Black Ops 3 launches this November 6. 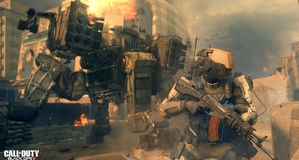