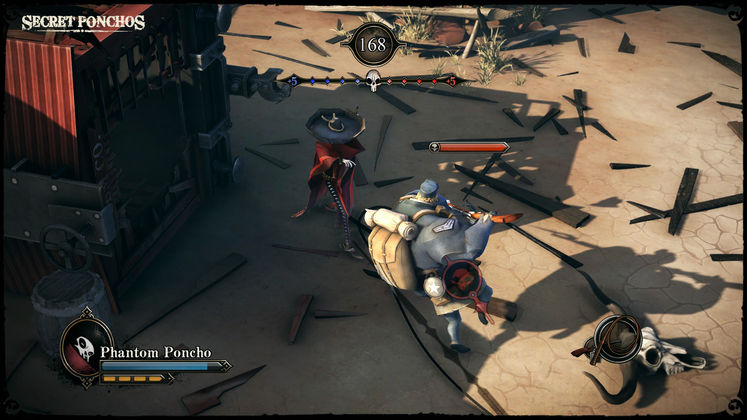 The set date for the game's official Steam launch has been announced as September 29, and it'll bring new game modes, updated gameplay, and several new gunslingers to play.

The isometric shooter will feature ten unique playable outlaws, each of whom packs a unique weapon and skillset. "Each playable outlaw has his or her own unique playstyle," explains the developer. "The evasive and deadly Matador sweeps enemies aside with her sword and swashbuckling style; Phantom Poncho can pull in his nemeses with a bullwhip and then finish them with a shotgun-slug to the face; the feral Wolf relies on her fearsome agility to savage her foes."

Player can either take each other on one versus one, or join up for team battles. In the final release there will also be a singleplayer practice mode with bots, and three new characters exclusive to the PC version.

Development on Secret Ponchos was part funded by Execution Labs' Finishing Fund, a grant aimed at small indie teams to help them get promising projects off the ground. I've added one of the developer's livestreams below, so you can get a good look at the game's tense, twitchy gunfights. The game will be priced at $14.99 when it launches on September 29.