21 January 2015 | By SimonPriest
It's the video game experience we've been waiting for, as indie Pixel Titans is here to prove they've harnessed the full potential of "bleeding edge graphics and gameplay" from the 1990s to steer the future of 3D gaming.

First-person shooter Strafe is now on Kickstarter and they've got a goal a little over $185k, with 28 days to get it. So far over a thousand backers are near $37k. It'll even support VR with Oculus Rift.

"You survived the hell demons of DOOM, the pure evil of QUAKE and the insane Nazi regime of WOLFENSTEIN 3D. But nothing can prepare you for the depravity of deep space in STRAFE."

We've got three weapons to choose from in Strafe; the shotgun, the machine gun and the railgun. Each has a secondary firing mode, with power-ups boosting the weapon attributes. "Rare power-ups alter your secondary fire, like turning your machine gun into a mine launcher to set traps or splitting your shotgun flak at mid-range into a wider net of punishment."

More weapons can be found throughout the game, and there's even a 'super weapon' somewhere.

"Levels get painted red with the glorious permanent gibs of your enemies. Because when you draw blood in STRAFE, the blood stays put as your twisted work of art," continued the Kickstarter.

"Every shell casing. Every blown-off limb. Every drop of monster juice. It all persists in the environment and never fades away, disappears, or disappoints. Just as you’d expect from a real-world massacre."

Check out the Strafe Kickstarter campaign to learn more about how the 1990s got it all so right. 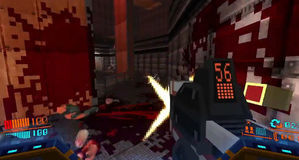