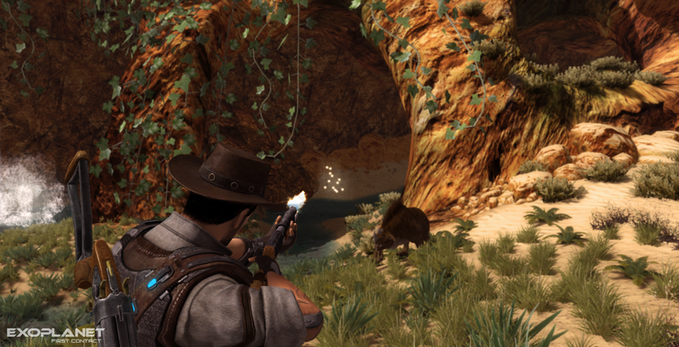 Exoplanet: First Contact is a singleplayer, story-driven Space Western RPG. Which is intriguing, because as any Firefly fan knows, Space Westerns are the best.

Developer Alersteam is currently seeks funds to complete the game's development over on Kickstarter. The team describes Exoplanet as a blend of the gameplay style of open-world titles like Morrowind and Gothic, with the sci-fi setting of Firefly and Dune.

You'll play as Jack Sharp, a gun-slinging adventurer stuck on the desert planet of K'Tharsis (see what they did there?), which is known only for its natural supply of a rare resource called Antigravium. Jack's spaceship, the Crystal Betty, has been stolen, and he's out to get it back, and revenge himself on the people that left him for dead.

"Exoplanet: First Contact is a mix of an RPG and an action game," explains the developer. "The player will decide how the story will unfold as he makes choices during the game that will affect the outcome. There’s also a serious amount of action, with classic gun-slinging with futuristic weapons. You have access to a wide range of guns allowing you to snipe targets at long range, or take out targets in mid to short range with assault rifles or shotguns. There’s even a set of melee weapons when you want to get close and personal."

There is also a crafting system, an open world with no loading screens to explore, and various unpleasant alien creatures to get eaten by. Exoplanet: First Contact is designed as the first chapter of an ongoing story. It's roughly ten hours long, and it'll introduce players to a world that Alersteam wants to expand, providing of course that they receive enough funding to do so.

The project has currently secured $12,647 from a $45,000 goal, with 22 days to go. You can find out a lot more about what Alersteam is cooking up over on the game's Kickstarter campaign page.