23 February 2015 | By SimonPriest
There's a ruckus over on Twitch and it’s got eSports exclusivity contracts written all over it. One streamer decided to show eSports player Sanghyuk “Faker” Lee's games through his channel, leading to a DMCA notice.

However the DMCA issued by streaming platform Azubu is in fact powerless, as Riot Games' terms and conditions for League of Legends state users "acknowledge and agree" that they have "no ownership" of content.

Sanghyuk “Faker” Lee plays for Korean eSports team SK Telecom T1, but only Azubu is meant to be able to stream their games due to contract. The fly in the ointment for the company is that League of Legends supports the OP.GG client, a third-party service supported by Riot themselves.

Twitch user StarLordLucian has been using OP.GG to observe Faker's matches, and then streams them from there, completely bypassing Azubu and any content they might have 'created'. The only DMCA that would carry any weight would have to come from Riot Games, but they won't it seems.

"Azubu does not own what I was broadcasting,” Lucian says.

“I was broadcasting live spectate games from OP.GG which is content made available by Riot Games and owned solely by Riot Games. Azubu does not own the trademark or brand "Faker" - I checked. I never broadcasted any game directly from Azubu.”

"Faker does not have any rights over the game assets,” he argues. “I am streaming game assets - the spectator client, not anything Faker or Azubu owns."

“Right now nothing my stream does is illegal or against the League of Legends terms of service. Riot can always change their terms. And Riot can DMCA my stream at anytime, as they have the power to put any League related IP or Project to an end.” 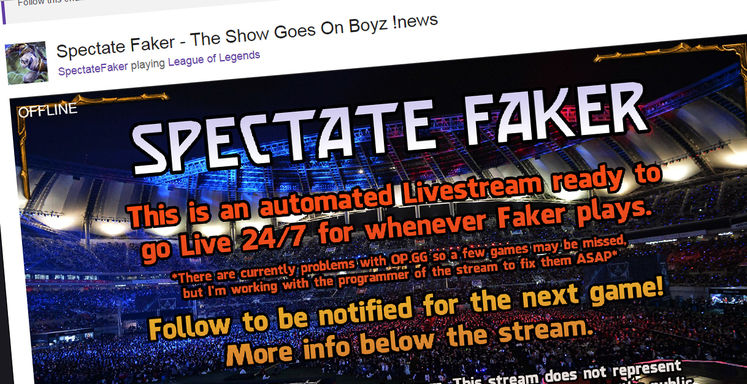 “You are rationalizing and trying to justify the fact that you have singled out a player against their will and broadcasting their games in a way that he can do nothing about. That reeks of harassment and bullying - Azubu vs Twitch is irrelevant in my view."

“If you can't see how this potentially harms Faker and/or anyone else in this situation, then that is more reinforcement that we need to take the appropriate action to protect players from this type of unique situation."

“As to the comments about our API, of course we want 3rd party devs to do cool things with spectator. But when people utilize one of its components to harm / harass an individual, then we need to potentially re-evaluate our rules.”

It's an odd statement from the League of Legends developer, referring to 'bully and harassment', as there's no direct evidence that Twitch streamer StarLordLucian has been doing anything of the sort. What this does however is give Riot the guise of acting under such a pretence.

Basically someone figured out a perfectly legitimate way of streaming matches of eSports players without the need of dealing with streaming platforms heavy with advertisements, not to mention possible match fixing and the like. Riot Games is publicly embarrassed and fears money is at stake.

Has StarLordLucian violated any rules? No, and that's what's panicked them. “I won't be listening to anyone else from Riot or on Reddit lecture to me about morals anymore," said Lucian.

"This whole issue is about a lot more than Faker. It's about Riot not enforcing their own legal terms of service. It's about a co-owner of Riot Games being completely out of touch with esports and the spectator mode. It's about a company (Azubu) issuing a false DMCA claim for content they didn't even own."

"These are issues that will affect the future of the game and the spectator mode. All of this needs to be debated for the future of League of Legends and esports.”

Score one for the little guy? It seems so. The 'offending' Twitch channel is still available.