26 February 2015 | By Nick Horth
I liked my time with Nival's upcoming RTS threequel Blitzkrieg 3 a lot, but I certainly had my concerns about the Russian studio's business model, which offered a free-to-play multiplayer suite and the option of paying extra for singleplayer campaigns.

It felt a bit out of touch with the game's otherwise distinctly old-school feel. Which is why I'm glad to hear that Nival's reconsidered things, and reverted to a traditional, one-time purchase model.

“The pendulum is swinging once again when it comes to how consumers want to pay for their games," explains Sergey Orlovskiy, CEO and founder of Nival. "The market is shifting back towards a cleaner, simpler and more transparent model of one-time payments. This trend inspired us to return to the classic distribution model of the series, thus honoring the series’ traditions.”

There's more good news! "Blitzkrieg 3 will be free from micro-transactions, in-game currency and any other form of in-game payments," says Nival. The touted Premium account system, which would have offered extra incentives and speedier leveling in multiplayer, has also been ditched. The developer does say that additional campaigns will be offered as paid DLC in the future. Which is totally fine! I don't think gamers have a problem with DLC in essence, just the way that it's delivered. This is a much simpler and more consumer-friendly way of doing so.

You can now pre-order the digital version, which includes three separate singleplayer campaigns and the game's asynchronous multiplayer mode, for $30.00. Doing so will net you access to a closed alpha test, which begins today. 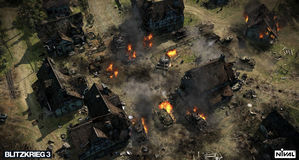