Worried that there hasn't been much in the way of WWII air combat titles? Fear not! Publisher/developer Ace Maddox has today announced Flying Tigers: Shadows Over China for release on PC this summer.

The game is based on the secret sorties of America's volunteer squadrons that flew against Japan in the China-Burma-India Theatre of WWII.

Players will be able to get stuck into the historical missions of the era as a result, with Flying Tigers: Shadows Over China offering up the Battle of the Salween Gorge and the Invasion of Malaya, to name just a couple.

Aside from an interesting setting, Flying Tigers is a premium, decidedly non-F2P title that boasts a full single-player campaign and a variety of multiplayer modes for up to 16 plane-straddling friends to take part in.

It also doesn't hurt, that the game looks rather pretty too.

Flying Tigers: Shadows of China will be available as a digital download for Windows PC sometime this summer.

Until then, feel free to wrap your eyes around the debut trailer for the game below. 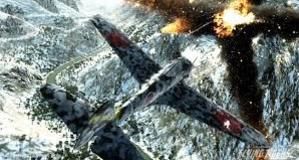