The new point and click adventures of King's Quest begin July 28th reveals Sierra, as the first of five total chapters release to fans. A Complete Collection will include all chapters but hasn't been detailed much beyond that.

There's a bonus epilogue chapter for anyone pre-ordering King's Quest. This return of the series is described as a re-imagining of the original games that delighted and frustrated us.

"King’s Quest is a collection of five different chapter releases, each focusing on an untold tale in Graham’s past. In each chapter, an aging King Graham reflects on his life of adventure with his granddaughter, Gwendolyn, while players are transported back to influence first-hand the decisions and events that shaped a kingdom."

A pox on thee Minotaur and damn your labyrinth, and you can shove that 'cliff staircase' puzzle and all. King's Quest releases on PC with its first chapter July 28th. 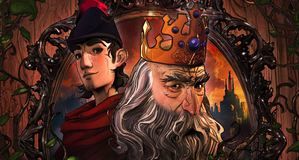