Civilization: Beyond Earth - Rising Tide looks like a typically weighty Firaxis expansion, which will add some much needed depth and flavour to the slightly underwhelming base game. This new trailer highlights the last of the four new factions in the expansion, and shows off some of the new hybrid affinity unit options.

The new guys are a Korean organisation called Chungsu, who specialise in subterfuge and espionage. The trailer doesn't reveal exactly what their faction ability is, but it's safe to assume they'll be able to make better use of their spies than anyone else.

Also showcased are the new hybrid affinity units. Whereas before you had access to either Supremacy, Harmony or Purity affinities, which governed the look and abilities of your units and structures, now you can mix and match to unlock dozens of new options. Pursuing Harmony and Supremacy, for example, will unlock some vaguely Combine-esque blends of technology and alien biology.

I played Rising Tide earlier in the year, and came away pretty excited. There's a tonne of stuff here that makes Beyond Earth feel fresh and distinct in a way that it just didn't before. The expansion is out this October 9. 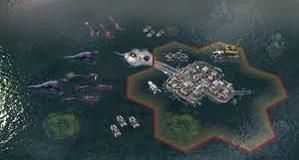