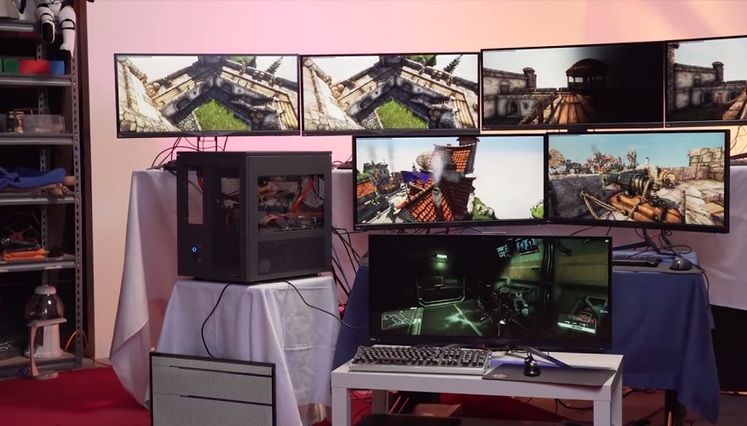 Building a high-end maxed out PC is an expensive process. Some players may end up putting together rigs running upwards of $7000 to run all games at the highest and most demanding settings possible. Nonetheless, a gaming rig is generally limited to the one person playing on the rig at that time. What about a multiple gamer household? Well, one clever build may have the answer, albeit not quite a practical one yet.

A video was recently posted up on the LinusTechTips Youtube channel showcasing a massively built rig that allows for seven concurrent gaming experiences running off of one massive tower. The channel has hosted a 2-gamer-1-GPU system in the past, but this system goes far and above, hosting what is supposed to be an ultimate large group gaming experience off of a single tower.

Now, this is in no way practical. The system built in the video is around $30,000 with all the materials included. Between the memory, cooling, and software requirements to run a rig like this, one could easily build multiple separate PCs with that kind of money. Not to mention, there are probably few if any systems that could maintain the strain of information traveling between seven different demanding systems at the same time for long periods of time.

Nonetheless, this is an interesting experiment in testing the limits of what we can do with the technology we have and its certainly worth noting that this is the kind of experience that could guide more practical attempts at the same glorious idea.