21 January 2016 | By Jonah A. Falcon
Bethesda has released a teaser trailer for their upcoming Theives Guild expansion for The Elder Scrolls Online: Tamriel Unlimited, which will allow players to join the shadowy organization as they have in the previous single player games.

"For the first time in ESO, players will join the iconic Thieves Guild – an organization of pickpockets, burglars, robbers, and thieves," stated the brief presser. "As their newest recruit, you'll sneak along rooftops, steal from the shadows, and recover lost treasures as you explore an all-new zone, experience new story content, challenge yourself with a new 12-player trial, and much more."

Bethesda promises to announce the release date and price "in the weeks to come." In the meantime, here is the teaser trailer. 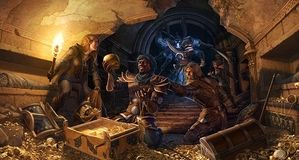