TOUKIDEN 2: All Weapon Types In Action

Toukiden 2 - a game all about running out into the wilderness and slaughtering everything you see - has arrived. The sequel to Toukiden: Kiwami, the PC version of KEOI TECMO's hunter game is in a far better place than its predecessor both in-terms of gameplay value and over-all technical stability.

Before the game's release, KOEI TECMO started putting out a short series of weapon demonstration videos highlighting the game's various options when it came to ridding the Oni plaguing the game's classic Japanese landscape.

Feel Like Killing Some Beasts? Toukiden 2 Is Around £37.49 on Green Man Gaming

Eventually only showing off around 4 of these weapon choices even after launch, we took it upon ourselves to finish the job - albeit with much less time, freedom and production values. Tackling an early mission with various entry-level pieces of equipment and recording our efforts led to this; every weapon-type in Toukiden 2.

The newest of the weapons shown off before the game's release is likely one of the most common. If you're familiar with the Katana or Long Sword in certain other similar giant monster combat games, you'll likely feel right at home with the precise swings of this one.

Cross-chop at the legs of your opponent in a worthwhile attempt to send them tumbling down. At that point, you can decide whether it's worth debilitating them further or ready a flurry of strikes on the soft skulls. It's a question of whether you're fighting for the prolonged safety of the hunt, or going for a quick kill.

Shown off just a day prior to the longsword, the knives in Toukiden 2 swap out the Samurai vibe for that of a Ninja. Likely longer than your typical kitchen blade, the twin knife setup allows for much more nimble movement and speedier slashes - but they won't cut nearly as deep as your average sword.

Good for those who like to pester the enemy with a focus on dancing around their frantic attacks, you likely won't be dealing as much damage as your allies - but you'll be keeping the enemy on its toes and look damn fine doing it.

Your tradition sword and board has arrived. A common choice for those looking for a fine offense and defence balance, the Sword & Shield combo is a good match for those who aren't afraid to take the enemy head on.

If you're looking to have the enemy bounce off a well-timed shield rise and punish their attempts quick follow-up attacks, you're likely to find a lot of joy in the simpliest of weapon picks. Constantly on the offensive in a way other weapon choices could only dream, reaction is key here and, if mastered, could see your blade rarely being disconnected from the enemy.

A fine choice for those who see the appeal of the shorter knife-style gameplay but are feeling hungry for even more mobility, the Chain Whip allows those experienced in its frenzied movements to dance even above the enemy and the slice and chop away at areas other weapon choices would have difficulty reaching.

Likely a fine choice in a support role within a group, the Chain Whip's wide-range attacks can dispatch a larger creature's offspring without ever really leaving the bigger problem alone for very long. Should they rush in to help their friend, they'll likely end up being hit by the very same strikes they're trying to prevent.

A little slow for the most part, the spear seems more suited to those who prefer to chime in with precise, annoying stabs at very specific points of a monster's carapace.

Not locked to slow and steady pokes, however, the lance excels at being a tool not only handy for those hoping to stay away from close-range damage while dishing out their own, but can turn that distance against the enemy further by charging into the enemy and unleashed a flurry of quick piercing attacks using the momentum of the run-up.

Much like a Dragoon from a certain JRPG series, the Spear allows you to use more than a single axis for your own good. Sweeps can hit multiple targets or knock a bigger Oni off its feet, or a quick charge-up means the wielder can leap into the sky and attack from above in a dizzying display that resembles a drill. Drill that Oni. Drill it hard.

Personally one of my favorites and one that, when paired with a second set, made for some serious enemy bruising in our pre-release co-op tests. Not only are the gauntlets weighted to deliver a satisfactory bone crunching punch, but they're incredible speedy when they want to be.

Slow and sluggish for the most part, the Gauntlet's ability to block in a pinch make then a good choice for the designated tanks to slap a Taunt buff on so they double as effect sponges just as much as they do powerful damage dealers. When you're not slowly jamming your fists into the skulls of your enemy, you can repeatedly wail on them at increasing speeds by tapping the B/O button as fast as you can. The quick-fire punches will both replenish and consume your stamina at near-even amounts, meaning you're flurry goes on for a good long while - monster permitting.

Much like the chain whip up above, the chain & sickle allows for far-reaching attacks no matter the situation - but allows for greater mobility by using the sickle to pull the user closer to a hooked enemy or flying back by casting the counter-weight away.

The chain & sickle is considered an entry-level weapon for those looking to dish out moderate hurt while having various ways to deal with incoming damage. Straggling mobs surrounding the larger prey will be turned to mince with its continuous burst swings leaving the rest of the team to carry on punishing the bigger problem.

And hard-hitter and a fan favorite. Not exactly winning any awards for the most creatively named weapon, it's one of simple tastes in its own right. Not your typical short-range mace, the club is a wide-reaching, pointed brick on the end of long stick - though that doesn't necessarily mean it's for those who'd rather stay at arms length away from danger.

The club is an essential piece of kit for those looking to do some high-damage limb breaking. Wailing on select piece on an Oni's body shatters the limb, allows for addiitonal damage and stun possibilities and otherwise means it's ripe and ready to be pulling from the enemy - rendering that particular obstacle void from combat. And the club works wonders in breaking these apart with its slow, yet heavy whacks.

Even its charge attacks just add one or two more powerful swings to its limited combos - but they're incredible powerful and more likely to stagger the oppoenent than any other weapon type.

An interesting choice for those really not feeling the want to be punished by a bigger enemy for standing too close. The bow allows its user to fire a flurry of arrows from a distance while nocking additional arrows further when you're really needing the extra distance.

Sacrifice a steady amount of stamina to lock-on to a near endless amount of enemies for some flying arrows or focus repeated shots on a particular target with the lock-on feature. There's not a whole lot to it, but the basic nature of the bow makes it a good option both newcomers unfamiliar with a monsters 'tells' or just for those who'd rather do damage from a distance.

Certainly not one we was expecting, but one we came out loving nonetheless. The Rifle is a versatile piece of kit that's welcome in heavy mob situations and single monster encounters alike.

With each rifle using varying types of ammunition from piercing shots to elemental bullets, the budding marksmen is expected to carry the right tool for the job. Reloading between shots is key, but the near-unlimited range of the rifle means it's easy to pull off precise shots no matter where you are.

You're a fine candidate when it comes to stopping an enemy from rampaging around the field and a well-thrown and fired at grenade can easily catch a monster off-guard. Load different types of ammo into each magazine to coordinate combos like a pro.

Let's just claim this is a faster version of the Spear. While not a wrong statement, it's not typically correct, either. The naginata is another mid-range weapon choice for those hoping to steer clear of the opposing oni as they ready stronger attacks.

For those most part, the naginata user will be slashing back and forth from a distance - but its ability to deflect enemy attacks with the right stance while consuming a large amount of stamina makes it a decent option for those rocking the Taunt ability in a group situation or for those well-accustomed to the attacking oni's movepool.

Swiping in with an uppercut may be a good way to catch the opponent off-guard with this one, but it's best application comes from the ability to jump above the enemy and unleash a wide-range flurry of blows as you slowly sink back down to flat ground. It's a versatile weapon that allows for equal amounts of dodging, parrying and hunt all at the same time. Put in the right hands, the naginata user will have little reason to stop delivering blow after blow. 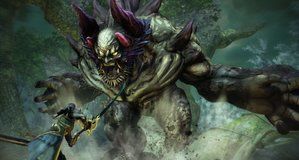