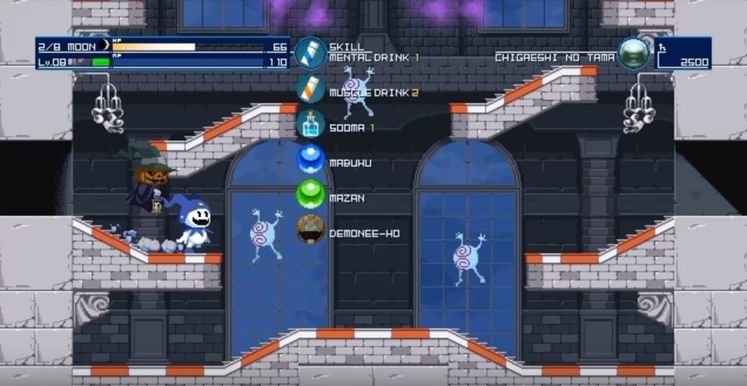 Depending on the types of games you enjoy, you'll know Atlus for very different reasons. Trauma Centre, Persona, Dragon's Crown, Shin Megami Tensei or countless other lesser-known franchises. Not a single one of those mentioned here have made it on PC. But one just took its first step.

Atlus are currently preparing to release Shin Megami Tensei: Deep Strange Journey - the next title in the long-running JRPG series that spawned the Persona movement in the 90s. Though currently only confirmed for a Nintendo 3DS release later this month, a precursor/tie-in minigame was just released on PC.

Teased in one of the game's latest trailers was a number of gameplay shots from a Metroidvania-style sidescroller staring Jack Frost and Pyro Jack - two of the series' common monsters that have made plenty of appearances in the Persona line of video games. The trailer ends by brandishing the gameplay footage as fake and fades away.

Everything on Persona 5 pulled from PS3 emulator site RPCS3

Would a Shin Megami Tensei title make it onto our Best RPGs on PC list?

With the trailer being Japanese, it's difficult to work out why Atlus would decide to do that at all. Why go through the trouble of 'faking' another game and including it in your trailer in far more than a single shot?

Well, that's because it wasn't fake at all. In some kind of elaborate double-ruse, the Jack Frost + Pyro Jack Metroidvania is absolutely real, free and available now. But it just begs the question of why Atlus would release what is essentially marketing material onto a platform that isn't expecting to play the game it's advertising.

Shin Megami Tensei: Deep Strange Journey Redux is an updated port of a 2009 Nintendo DS game. Announced as part of the series' 25th Anniversary event in which a modern home control title was also revealed for a later date, is there now a chance Atlus could test the waters of a mainline PC release with the handheld-bound Shin Megami Tensei: Deep Strange Journey Redux? Maybe they're already testing with this Shin Megami Reincarnation SYNCHRONICITY PROLOGUE mini-game. You can download it here.