Risk of Rain 2 has, after an explosive and unexpected release on Steam, settled into its role of a modern classic in-the-making, and the developers kept chipping away at upcoming content and much-needed fixes in the background. That's why the Localization Update is now here!

Risk of Rain 2 Localization Update brings with it - as you've probably guessed - an abundance of localization options for players who are inclined to use them. It also fixes a wide variety of bugs, most pressing of which was the one that caused enemies to stop spawning after a long match. 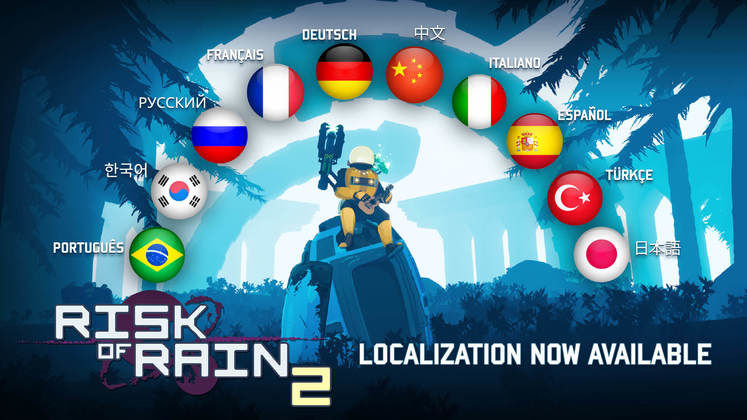 First things first, players can now choose between the following translations of Risk of Rain 2: Portuguese, Korean, Russian, French, German, Simplified Chinese, Italian, Spanish, Turkish, and Japanese. To pick one instead of the default English localization, right-click on ROR2 in your Steam Library and choose another option from the 'Language' tab.

Director no longer stops spawning monsters late in the game

Director no longer stops spawning monsters late in the game

Fix an issue where every item pickup saved immediately to disk, causing a stutter

Game now launches with 60 fps cap on by default to help with certain GPUs. This can be turned off in the settings.

Fix Imp Overlord's void spikes not having their proc coefficient properly assigned. This means that you will bleed and burn for a longer duration from that attack.

A major new content-packed update for Risk of Rain 2 will be coming out in June, so do not despair if you're disappointed by the lack of new content in this particular update.