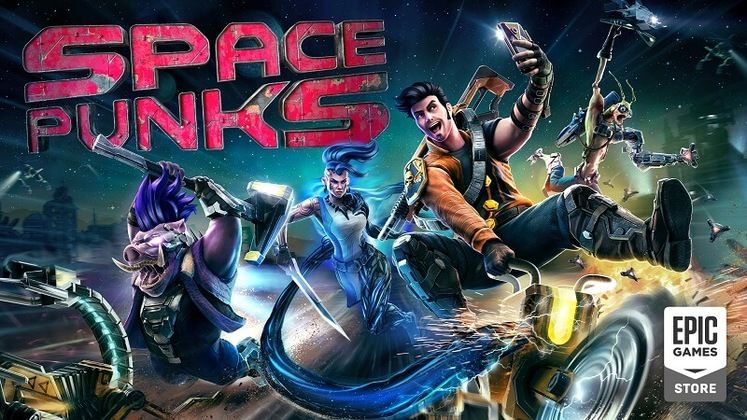 Explosive, fast-paced action games are part of Polish developer Flying Wild Hog's DNA. This claim was repeated a number of times during a hands-off preview for upcoming sci-fi action-RPG Space Punks that we recently attended, but anyone who might doubt it need only look at titles like Shadow Warrior or Hard Reset from the studio's past.

Space Punks itself continues down a similar road, but not without changing up some things and marking two notable first occasions. On the one hand, it's Flying Wild Hog's first venture into free-to-play territory. On the other, it's the first game released by Jagex Partners, the Runescape dev's third-party publishing program focused on live service-style games. 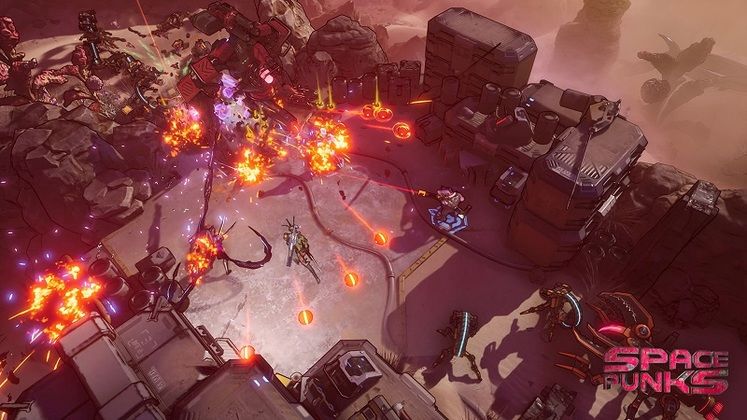 Flying Wild Hog's Krakow studio names twin-stick shooter Helldivers as a source of inspiration, but its goal with Space Punks was to make it so that "once the action starts, it never ends," which is why it's taking the live service approach.

In terms of gameplay, Space Punks is a top-down looter shooter that channels games like Diablo and Destiny 2 while also setting off to do its own thing. It's driven by the endless pursuit towards obtaining better loot and leveling up your characters, but will also not skimp on the story.

While there's "plenty to enjoy when you’re on your own", the inclusion of mechanics like class synergies and certain difficulties and modes suggest that co-op is the way to go if you're looking to get the most out of the game.

When Space Punks first launches, players can choose between four playable characters, described as misfits rather than your usual heroes, but more are said to join the roster after launch.

Duke's pursuits are fueled by his simple desires to become famous, rich, and loved. He “gets in, blows shit up, gets out, and cashes in,” using an all-rounder playstyle that's most effective at mid-to-close range. In terms of abilities, he can throw a hologrenade that can be manually detonated, call forth a decoy that distracts opponents, and motivate allies. 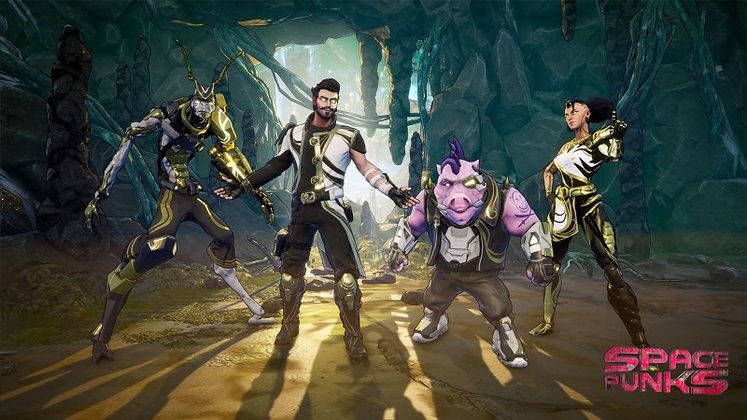 Half-cyborg hacker Eris is the mysterious and knowledgeable one of the bunch, her infiltrator playstyle suiting players who favor a stealthier approach. Themed around nanobots and technology, her skills enable her to impale enemies on nanobot spikes, or deal damage to all nearby opponents.

Finn is a bipedal hog that packs a mean punch. Although he looks like a rough mercenary that thrives when he's surrounded by explosions, all he really wants is to get rich so he can become a farmer, own his own piece of land, and live his life peacefully. Preferring to fight up close, he can summon forth a minigun turret, a drone that provides air support, but also surprise enemies by sprinkling mines around him.

Lastly, there's Bob, the squad's insectoid engineer, and explosives expert. He chases coins so he can visit Earth and immerse himself in as much pop culture as possible. He also has some quite efficient crowd control and utility options that let him pull enemies towards him or give the entire squad unbreakable shields.

Each character has access to three skills, one of which always synergizes with certain teammates, effectively changing the way in which it behaves when the right teammate is in close proximity. 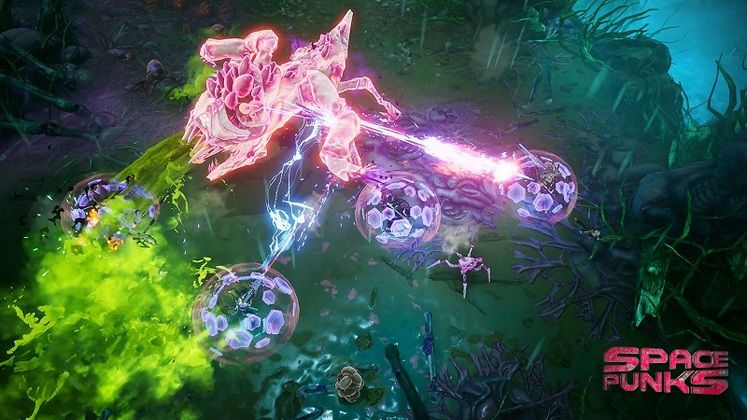 All missions – or Jobs, as Space Punks calls them – start with players readying up in the lobby screen. Upon arriving on a planet, you can check out the different character entrances that can be purchased from the in-game shops or obtained through Founders Packs (more on monetization and joining early access below).

The Job Selection screen is "the heart of the game," and basically the place where you can select between the different available mission types. Depending on your pick, you'll be able to grind certain types of items or materials more easily. You also won't have to compete for loot with your friends, should you choose to play in co-op, as each player has their own individual loot drops.

The gameplay demo we were shown was focused on a mission that saw the squad headed to a planet overrun by deadly plants and crazed mutants, after accepting a job from a scientist who wanted to create an army of gladiators (for very valid reasons, we're sure). Aside from the vital main objective, completing bonus objectives (which may involve opening all loot crates, or having a specific character in the squad) grants extra rewards at the end.

Movement and proper understanding of the characters' three abilities are required if you plan on coming out alive, and this was highlighted rather clearly during a boss encounter with a giant insect called the Jearbear. With a bucketload of health as well as deadly area of effect attacks and charges which left behind a trail of poison, the squad had its hands full. Eggs also spawned around the arena, bringing forth smaller enemies if not destroyed in time. 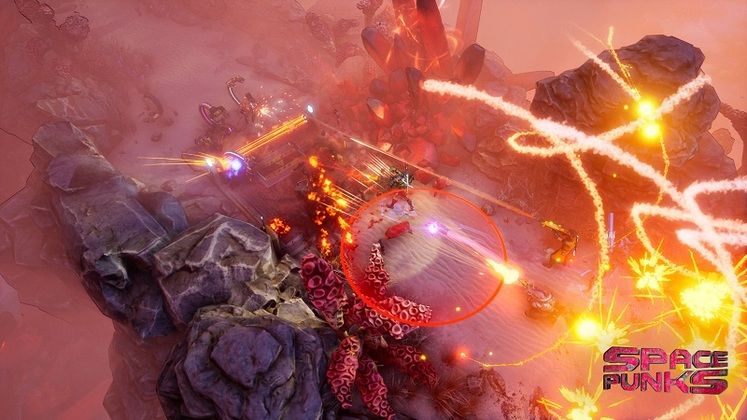 Each character also has a Dash skill that they can use to get around the environment and which is functionally and visually different, depending on which character performs it. Eris slithers across the battlefield, while Duke does a good old roll that comes packed with invincibility frames, Design Lead Bartek Schweiger told us.

It takes effort and cooperation to take down these giant foes and, save for an expertly timed ability on Finn's part which protected the entire party from dying, the mission could have gone south in an instant. The intense action can get quite messy when everyone is firing off abilities at swarms of angry bugs, but it's part of Space Punks' over-the-top nature.

Once you've completed your objectives, you can go over your rewards on the summary screen, after which you return to the game's hub area. Here, you can interact with other players and show off your awesome gear and character builds. Item trading, however, isn't part of Space Punks, "at least for now."

The game's hub area is where you'll actually do a number of things, including managing your party and equipment. The Management screen lets you check characters’ skills, who they synergize with, as well as their power level which Schweiger calls "your most important stat." He compares character power level to Light in Destiny, explaining that "you need to have a good character level and also good gear, to be able to progress." 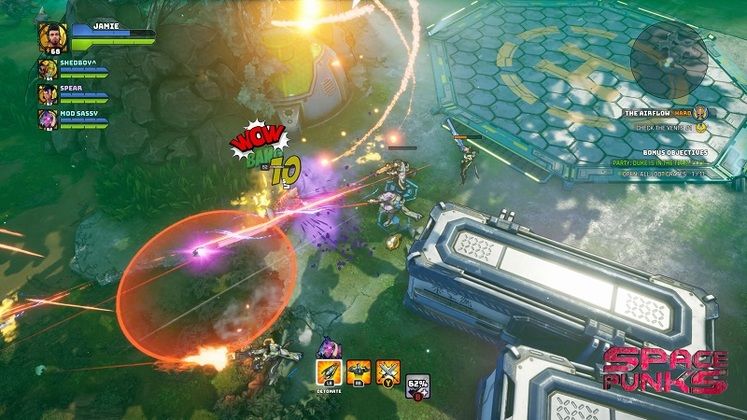 Each character comes with a set amount of health, shield, movement speed – the game's three main stats – that also influence their playstyles. Initially, these level up automatically, but the developer plans "to expand on that in the span of the Early Access."

The Vault screen lets you manage your inventory, go through your equipment and customize it using different mods that can drastically change the way in which weapons behave. A railgun's beam, for example, can be given the ability to ricochet off walls and terrain.

Initially, the game will give players a limited amount of inventory slots "because of the technical limitations of our slot system." The developer does plan to "give players as much inventory space as we can technically," and will not monetize inventory slots, at least during Space Punks' early access phase.

Another piece of the puzzle when it comes to character builds is the expansive, multi-branch Talent tree. It not only grants passive bonuses, but also includes Talent slots, which let you “shape your character with more precision”.

Players earn talent points every two character levels, but you will have to be selective, as you can't grab everything on there. It's how the developer aims to encourage trying different builds and will be complemented by an option to respec characters.

"We have something that we [internally] call Talent Items. It’s another type of loot that you can grind, and you can grind better and worse Talent Items to then put into the slots," Schweiger told us. "Talents are passive bonuses, but we also have talents that have special triggers, for example when your health is below [a certain threshold] then you get a special bonus, or when your shield is depleted, enemies around you are pushed away." 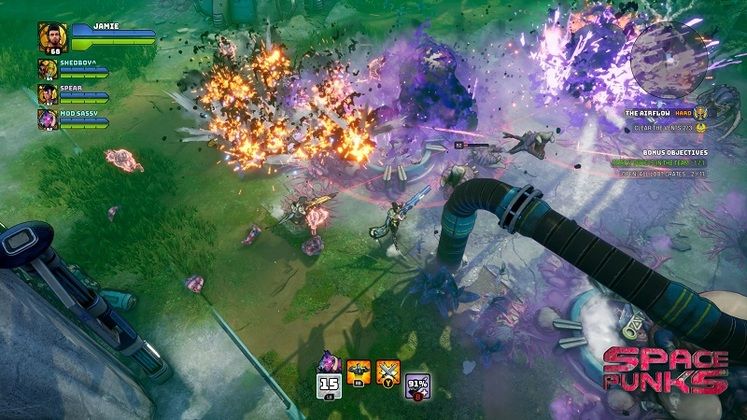 Crafting is a “huge thing” in Space Punks, letting you combine miscellaneous loot into a piece of gear that “precisely suits your needs,” determining the type, stats, and mods of that weapon.

In fact, it will be the main feature during endgame. "To tackle endgame activities, you will want to gather crafting parts, maybe dismantle weapons that you have gathered on your missions and craft your own to customize them to [fit] your character," Schweiger said.

Speaking of Space Punks' endgame, players can choose between several game modes, which are special types of missions that are mostly meant to be played in a party.

"We want to introduce two or three of them between our open beta and launch. One mode will [focus on] missions for four players, something like raids or strikes in Destiny,” according to Schweiger.

The team also “wants to experiment" and see how the community will react to Space Punks’ second game mode, which will feature a form of "indirect PvP". This essentially means that "each player will get a set of the same tasks" and do their best to complete them while also "having the ability to get in the way of each other." 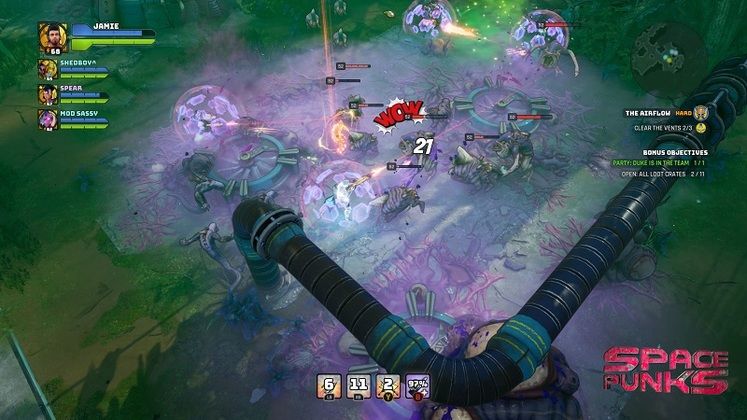 A third game mode "will be introduced later" and resembles Diablo 3’s Rifts, pitting players against tougher enemies and obstacles as they take on increasingly difficult levels. Generally speaking, the higher the difficulty you tackle when playing through Space Punks' missions, the better the loot.

Players will also have daily and weekly contracts to pursue, while Trophies grant additional rewards for achieving long-term goals.

As much as Space Punks focuses on fast-paced action, loot, and character customization, Schweiger tells us that story won't be neglected.

"At the start, somewhere between Early Access and Open Beta, we want to release [a big story campaign] as one of our updates and it will be like this overarching story about all four of our characters. Then, we plan to add smaller chunks of story in further updates." 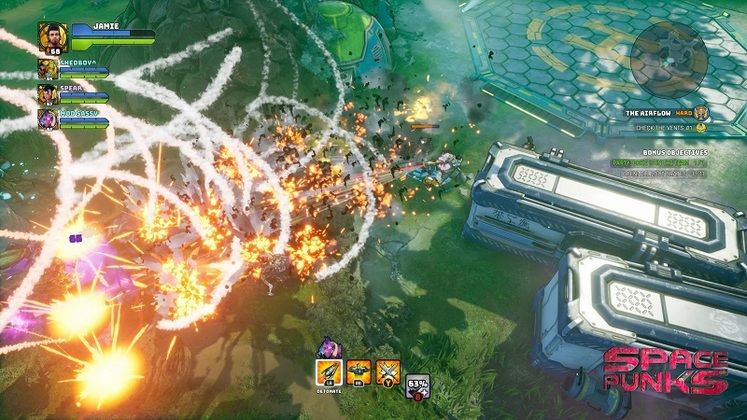 Lastly, the Premium store will be the game's main avenue of monetization, allowing players to purchase various cosmetic items for their characters. VP of Third Party Launch & Partnerships Jeff Pabst stressed that it "will not give gameplay advantages to anyone."

Space Punks is set to first launch on PC in early access on July 14, with a PC Open Beta following in Winter. The free-to-play title will be an Epic Games Store exclusive for 12 months, and will also arrive on consoles in 2022.

Players who wish to get a taste of how it plays during Early Access and provide feedback can obtain a key through Jagex and Flying Wild Hog's social channels and media partners or by purchasing one of the two available Founders Packs.