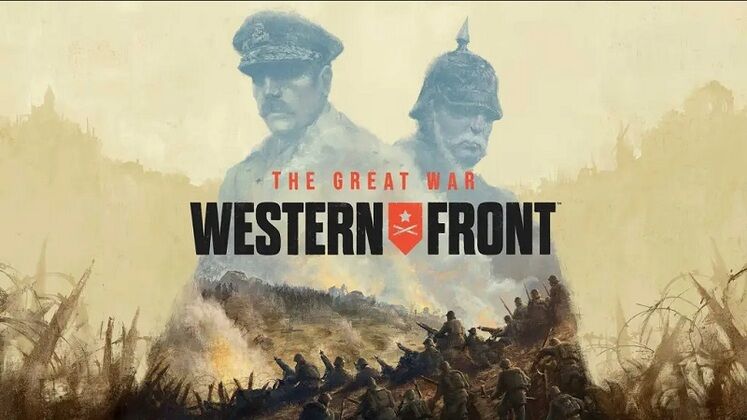 Timing is vital when you're assaulting enemy positions in The Great War: Western Front and I learned this lesson the hard way during my recent hands-on time with Frontier Foundry and Petroglyph's newest strategy game.

Thrust into the Second Battle of Passchendaele, I take control of Canadian soldiers tasked with dislodging German forces from their well-established positions.

Shortly after starting the battle, a rolling smoke barrage begins firing, offering much-needed cover for my advance. But ordering my troops to charge the enemy trenches several seconds too late means that, as they get close, the enemy machine guns open fire, swiftly turning them into lifeless corpses.

The reinforcements I request don't fare much better, and my first run ends up sacrificed to familiarizing myself with the game's flow and UI.

Thankfully, my second attempt goes much smoother. Keeping my troops closer to the rolling barrage means that only a few of the hundreds of soldiers sprinting towards the enemy fall. 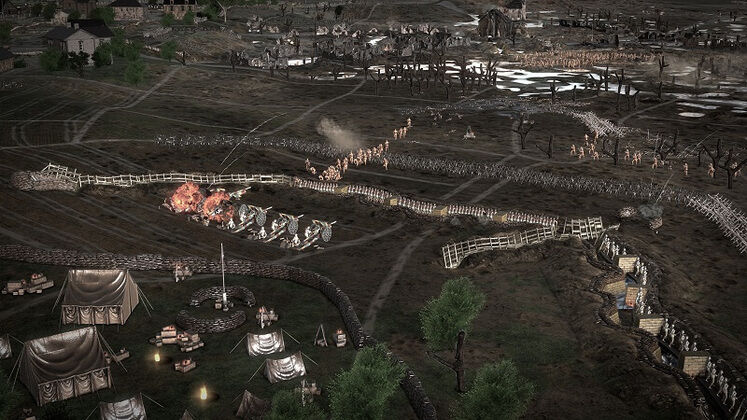 In addition, having my artillery open fire on the enemy positions suppresses the opposing forces, allowing my troops to slip into the trenches for a bout of hand-to-hand combat.

Once they're inside, I can't really influence all that much, aside from moving troops to different trenches and making sure that the more efficient Raiders used their clubs against the enemy's regular infantry.

Watching my army move across open ground with few casualties as artillery blasts the enemy positions is truly satisfying and synchronizing everything makes me feel like I'm conducting a deadly concerto.

As soon as I capture the enemy position, it's my turn to defend. I have to organize my troops in the newly-conquered trenches – which can accommodate up to two units from each side – so that they can fire at the enemy without being exposed to artillery.

I also need to carefully aim suppressing and creeping barrages at the charging enemy units, to make sure they don't get too close. 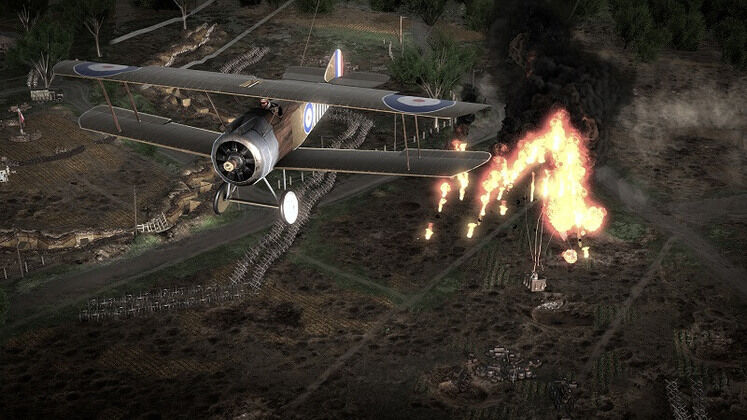 Raising balloons extends my line of sight, helping me figure out which direction the enemy is attacking from, but enemy planes can take this advantage from me if I'm not careful.

Defending is a more static affair but still requires a fair bit of attention, as the enemy sends in bombers and pounds my positions with artillery.

As I watch everything unfurl from above, I can't help but wonder about the terror the men those digital sprites represent must have felt trapped in those trenches, their only option being that of firing at the enemy and hoping a shell doesn't end their life.

The German assault proves futile, thanks to the sheer power of my artillery and machine gun positions. The hapless foes soon cease trying to charge my trenches, establishing me as the owner of that particular stretch of dirt.

Having successfully defended, it's time to deliver the killing blow by taking out the enemy's command outpost on the opposite side of the map. I can also tackle side objectives to clear the flanks, which reward me with more supply to recruit units and use special actions, as well as new troops. 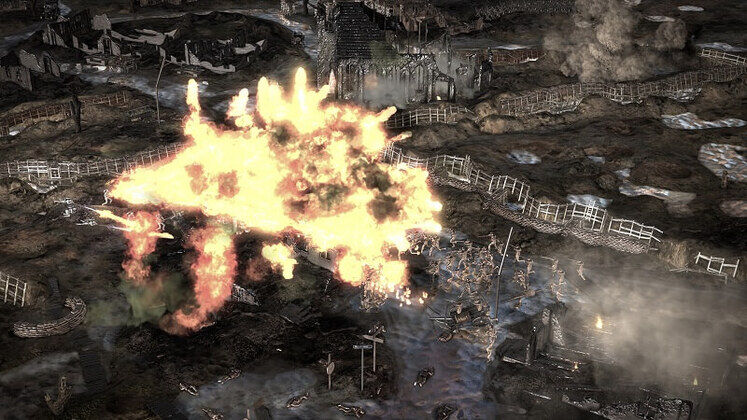 This means I'm back on the offensive, while also having to hold the freshly-conquered position. I also get access to air support, which I can use to harass enemy infantry out in the open, take out their scouting balloons, execute bombing runs, or engage in dogfights.

Although I can opt for a multi-pronged attack, I take advantage of all the tools at my disposal and bomb the position on my left flank to oblivion using artillery and planes before my soldiers charge in.

I lose quite a few troops while fighting inside the trenches, but still keep casualties low enough to satisfy one of the mission's secondary objectives.

This is where The Great War: Western Front delivers its final lesson, as I run out of supplies thanks to gratuitous bombing and cannot support my troops when attacking the other two positions. On top of that, I learn that ordering soldiers to move through barbed wire, rather than around it, is not the greatest idea.

Without suppressing the enemy, their units fill my infantry with holes, which leaves me with the only option of surrendering. 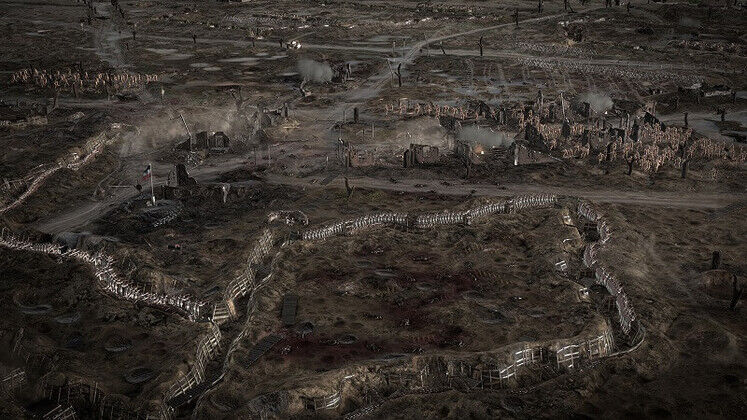 It's a harsh lesson and, while my time with The Great War: Western Front wasn't the most successful, I can't help but notice the rather interesting flow to its fights and how it does try to replicate the actual battles of the period.

As chaotic as hundreds of men charging trenches can sometimes look, you need to time your actions so that your army functions like a well-oiled machine.

When it does, it feels great to see the enemy numbers dwindle, earning yourself a new patch of blasted land.

The Second Battle of Passchendaele is one of six planned Historical Battles that will be available at launch.

These handcrafted scenarios give players preset trench positions, a limited number of supplies used to field troops alongside fixed objectives, in an attempt to provide an authentic experience of what fighting across those locations felt like, according to the publisher. 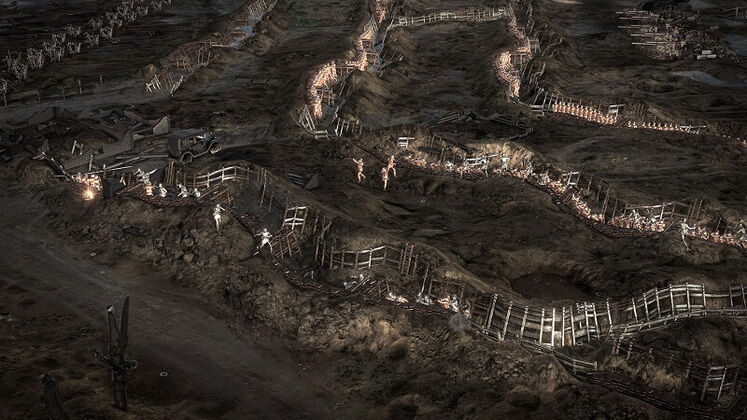 Three other modes are planned for release. The Great War: Western Front campaign sees you switching between the role of Theatre Commander – where things take a grand strategy-inspired turn – and Field Commander, which offers real-time battles similar to the one that I played.

In this mode, revisiting old territories means witnessing the ravages past battles brought, the publisher claims. Skirmish and multiplayer are also confirmed for launch.

The small chunk I played leaves me optimistic and I imagine it'll be easier to grasp the game's flow with some experience from the campaign or a proper tutorial. The Great War: Western Front is slated to launch on PC at some point in 2023. 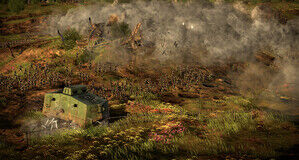