Twin Mirror Delayed To 2020, Will Be An Epic Store Exclusive

Developer DontNod Entertainment has announced that its upcoming third-person adventure game Twin Mirror has been delayed. It is now aiming for a 2020 release.

Twin Mirror's delay was accompanied by the announcement that the title will be an Epic Games Store exclusive on PC for the first 12 months following release.

"The financial terms of this partnership ensure a more advantageous distribution of revenues for DONTNOD.", a press release reads in reference to Twin Mirror's announced Epic Games Store exclusivity. Publishing of the game's console versions will still be handled by Bandai Namco Entertainment.

Announced last year, Twin Mirror follows investigative journalist Sam Higgs who returns to his hometown to attend the funeral of his best friend. Things take a sudden turn the morning after the funeral when Sam wakes up only to find his shirt stained with lots of blood and lacking any memory of what had happened the previous night. In his attempts to make sense of it all he's joined by his alter ego, The Double, who acts as "an occasional advisor and permanent wise-ass". 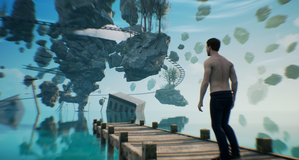