A charming turn-based scrap down at the old grove

Far away from the eye-straining scope and industrialised violence of recent strategy efforts, developer Thoughtshelter has wrought something a little more low-key with their Kickstarter funded title, A Druid’s Duel. Swapping out the grim, scorched earth for seasonal lands awash with colourful vitality and replacing the bullets and rockets with crudely fashioned weapons and cartoon-style predatory beasts, it’s clear that Thoughtshelter’s inaugural title is something rather different from the norm.

A turn-based tactical battler that embraces an isometric perspective, A Druid’s Duel pits teams of up to four differently coloured druids against each other on one of a great number of modestly-sized tiled boards. Success is simple; whichever coloured druid clan remains on the board after vanquishing their foes is the winner, but as you might reasonably expect, there are more than a few wrinkles in place to spice up the proceedings. 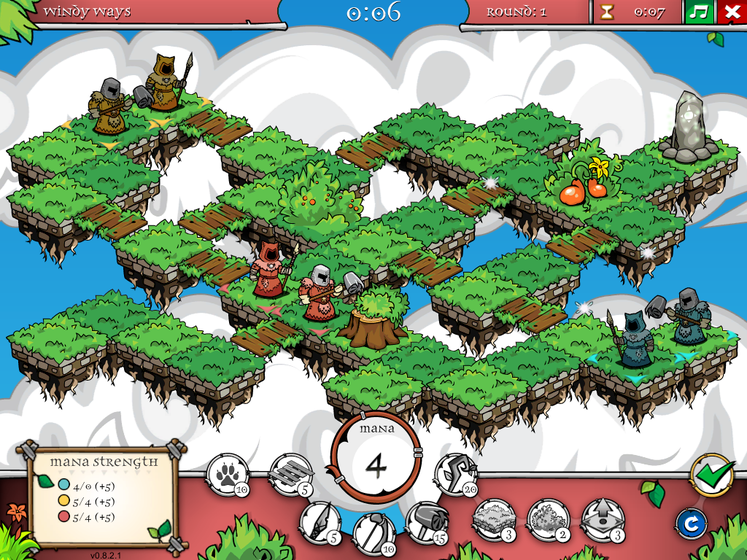 As well as new units, mana may also be spent on bridges to allow access to other parts of the map

Similar to its genre stablemates, A Druid’s Duel employs a form of currency, known as mana, that allows wannabe leafy tyrants to bolster their ranks with additional units and infrastructure. While such tender can be accrued by occupying spaces on the board, mana does not carry onto the next turn and so the player is forced to expend their balance before finishing up.

It’s an interesting twist that forces players to make the most out of the resources they have in that instance and one which when confronted by armchair generals who typically like to stockpile their resources (such as myself), necessitates a different approach in order to succeed.

Speaking of mana, the rate in which it rolls in is actually dependant upon the season that is currently active. You see, A Druid’s Duel has six different seasons and squares can offer higher or lower amounts of shiny mana depending on the time of year that it is. The autumnal season of Aldenfalle might offer three mana per square for example, while the frigid season of Deepwinter on the other hand may only dish out a single point of mana per occupied square.

Luckily, the good stuff can also be obtained from other sources too, with the various fairies and relics dotted around each board all acting as handy sources of instant mana. The presence of these one-time pick ups also introduces an additional consideration into the proceedings; making players decide between taking an enemy unit or making a land-striding cash-grab for some additional funds.

Where A Druid’s Duel really showcases its impressive depth though, is in the various druid units that can be used and the animal forms that they can transform into. Each druid team has access to four different classes; Guardian, Wind Rider, Snarlclaw and Way Walker which as well as possessing a set of abilities unique to each class, can also shape-shift into a different creature, opening up a further array of abilities.

Naturally as you might expect, each of these druid folk have their own traits and skills which make them useful in certain situations. The Wind Rider can defeat foes up to two squares away with his bow and arrow, while the Guardian can morph into a Wolf (the act of which costs precious mana), allowing him to traverse up to four spaces but sacrificing the ability to attack as a result. 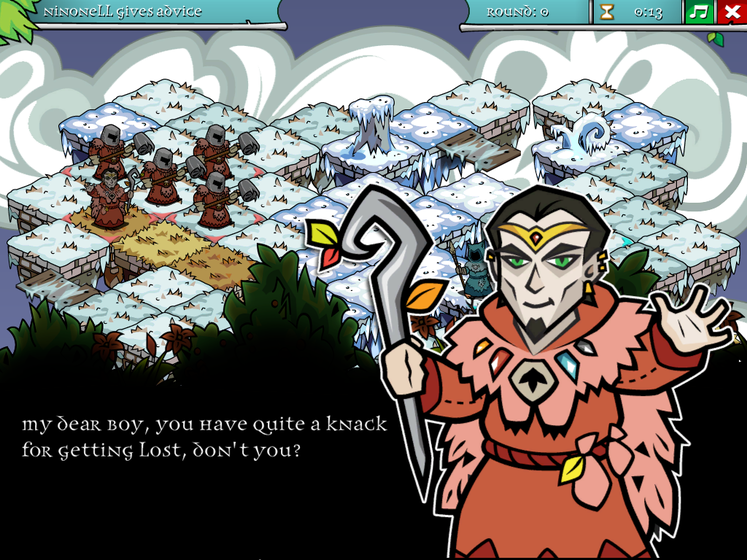 A campaign mode helps budding druids to refine their craft

While most of the druid units appear largely balanced, the Snarlclaw unit stands out as somewhat overpowered at this point. The ability to morph into a hulking bear that can tear through multiple units in quick succession within a single turn proves to be quite the momentum shifter indeed, easily turning what seems like certain victory into frustrating defeat.

Hopefully in the final build the mana cost for the bear transformation is increased since right now, especially in the hands of an AI opponent, two or more Snarlclaw units can spell the end for anyone but a truly experienced player.

Ultimately though, with its deceptively substantial scope for tactical latitude and streamlined ruleset, A Druid’s Duel manages to nail that rare mantra of “easy to play, difficult to master” with verve. Such a pick up and play mentality also leads quite naturally into one of the game’s greatest strengths too; namely local multiplayer.

A rarity in contemporary genre efforts, A Druid’s Duel allows up to four players to play locally in hot-seat style around a single PC as the controls are passed around to the next player as the previous turn concludes. It’s a revelation quite frankly as it evokes memories of gaming’s halcyon days where multiple figures would be excitedly huddled around a computer, getting stuck into a night-long multiplayer session.

Of course for those who don’t fancy local scraps, A Druid’s Duel also supports online skirmishes while allowing potential druids in training to sharpen their skills against AI opposition, who, despite the lower difficultly levels available, can still present a stiff challenge to even the most well-versed player.

Steeped in the sort of charmingly twee aesthetic that might make you think you were playing an obscure JRPG with a fetish for anime stylings, A Druid’s Duel audiovisual presentation is just one more instance of how developer Thoughtshelter has separated the game from its would-be peers.

With its menagerie of colourful characters, vibrant maps, pacifist animations (these druids don’t ‘die’ as such, but merely change into a cascade of falling leaves) and warm, folkish instrumental score, A Druid’s Duel is not only modestly attractive but also proves to be suitable for all players of all ages too. 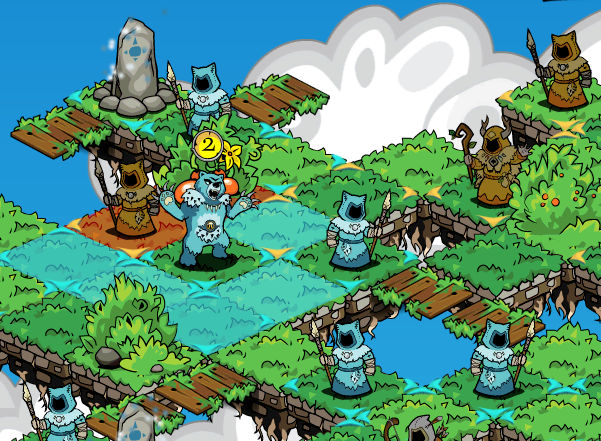 Not to be trifled with, the Snarlclaw turned bear can wreck havoc among the opposition

When compared to its bigger budget genre counterparts, it’s clear that the pleasures sampled from A Druid’s Duel come from an earlier, simpler time. Arguably more akin to a boardgame than the sort of sprawling tactical epics that are synonymous with modern strategy, A Druid’s Duel looks to rekindle those joys of yesteryear with aplomb, doing so with the sort of laser-like focus on accessibility and charm that a few of its more ostentatious peers could certainly learn from.

Currently on Beta version 0.9.9.1, A Druid’s Duel is tentatively set for release before the end of February 2015. That said, players can preorder the game at the currently discounted price of £5.69 ($8.99).

Most Anticipated Feature: Getting the mates around (and the beers in) and getting stuck into a hours-long local multiplayer session. 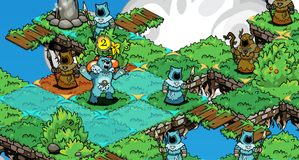