12 September 2011 | By Joe Robinson
There's only a few sure-fire ways of making a game an instant success... or at the very least, mildly entertaining. One of those ways is to have a very 'cinematic' gameplay experience – or using the technical terms – adding in lots of explosions and moving objects. If anything than be said of Ace Combat: Assault Horizon, it's that it's got a lot of moving objects. And explosions, now that I think about it. The eighth console iteration of the series (and the second to be set in the 'real' world), Assault Horizon is literally bringing out the big guns.

The first thing we ever saw of the new Ace Combat was a rather Hollywood-esque cinematic trailer, which could give even Battlefield or Call of Duty a run for their money. The story itself seems to actually be trying as well – which is nice to see because for a franchise like this, you wouldn't need to try too hard to make the narrative good. Given that it's set in a brand new setting from the previous seven games (which were all set in a fictional version of Earth), it's got nothing to draw on as well. Still, there's a lot of changing of POV's from what we've seen so far, which could make the story difficult to connect with.

A first in the series, the developers have expanded the definition of what 'Ace Combat' is all about, and there will be segments where you pilot things other than an airplane. Shocking, I know – so far we've witnessed you playing as the side-gunner in a Black Hawk, and even taking control of a deadly Apache Attack Helicopter. We've also been told you'll get to command an AC-130, and possibly even a Stealth Bomber. Even Ubisoft's H.A.W.X. 2 mixed things around a bit from time to time, so you can be sure Ace Combat will as well.

The core the game is of course the air combat itself. There's two 'phases' to your basic dog-fighting: You've got the initial phase, where your target isn't that close to you and you can get a target lock, firing missiles and even firing your machine gun although that probably won't do much good. The second phase is what they simple call 'Dog-fight mode', where the controls are more or less taken away from you, leaving you to concentrate on killing people. It becomes a mini-game of sorts – you have to keep the enemy inside the target reticule so that you can get a clean kill with either missiles or bullets. You also have to be aware of enemy counter manoeuvres, and it is possible for an enemy to break away from you, despite you not having movement controls.

Of course there is the saying what comes around goes around - enemies can enter a 'dog-fight mode' against you, although in this mode you still have control over movement. The enemy's reticule will be trying to keep you in its centre, and you've got to basically do what you can to shake them off. Again, like when you are in DFM, if you're good you can pull off a counter manoeuvre of your own and end up behind your enemy, leaving you free to tear them a new one.

As for the other potential vehicles... so far we've only flown the Apache Gunship (well, and the Black Hawk side gunner, but that doesn't really count at it's not that interesting). Obviously they handle completely differently to the fighter planes, and so the missions are different too. Despite reservations at having a plot that jumps around a lot, jumping into an apache does help break things up a bit although we don't know what the balance will be regarding how many times you try out each available type of vehicle.

The missions so far seem to be a decent length, but there's a danger that there's not enough variety. Defeating wave after wave of the same enemy can get a bit stale after a while, but we've only played through the beginning of the game, so hopefully later missions will have you doing more different things, aside from flying different aircraft.


It's hard to tell how this Ace Combat will fare compared to the rest of the series - there's only be one other real-world Ace Combat game, and it really all depends how attached gamers are to the fictional world. Seeing the Russian Air Force tear up Miami all seems a bit Call of Duty to me, but if that's what people like it's hard to argue. Still the controls and the atmosphere still seem as good as ever, even if they have taken even more of an arcade slant, and it really does look beautiful. Ace Combat: Assault Horizon is due out on Playstation 3 and Xbox 360 on October 11th (North America) and October 14th (Europe).

Most Anticipated Feature: The dog-fighting mode is quite fun, and challenging too depending on the enemy. 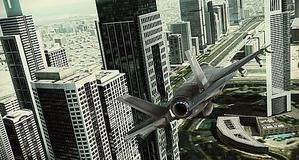